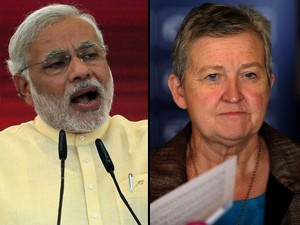 Gandhinagar, Feb 13 (IANS) In a clear indication that the US may be changing its stance towards Narendra Modi, whom it was treating as a political pariah, US Ambassador Nancy Powell Thursday met the Gujarat chief minister, who is seen as a strong contender for the prime minister’s post after the general elections.

The meeting marks a significant change in the US stance as the Bharatiya Janata Party leader was denied a visa in 2005 in the wake of the 2002 Gujarat riots.

Commenting on the meeting, External Affairs Minister Salman Khurshid said Modi owes an explanation over the riots, while Janata Dal-United leader Shivanand Tiwari said that Modi will never be able to wash his hands of the violence.

During the meeting, Powell “held comprehensive and wide-ranging discussions with Modi covering all facets of the Indo-US relationship and cooperation, in the wider global context”, said a Gujarat government release.

Modi raised the issue of the recent diplomatic row over the hand-cuffing and strip-search of Indian diplomat, Devyani Khobragade, and “expressed hope that a permanent solution would be found soon”. Powell “reassured that the US government was fully committed to resolving this issue at the earliest possible”.

“Modi stated that for strengthening the Indo-US Strategic partnership and realize its full potential, it is important that such irritants should not be allowed to happen,” the statement said.

He also emphasized that the perpetrators of the 26/11 Mumbai attack must be quickly brought to justice. Lashkar-e-Taiba operative and Mumbai terror attack planner David Headley is in a Chicago prison and India has sought his extradition.

The US embassy in New Delhi said in a statement that the meeting “was part of the US Mission’s outreach to senior leaders of India’s major political parties in advance of the upcoming national elections”.

The discussions during the hour-long meeting focused on the importance of the US-India relationship, regional security issues, human rights, and American trade and investment in India, the statement said.

Powell “has shared and listened to views on the US-India relationship” and she “continues to emphasize that the partnership is important and strategic, and that the United States looks forward to working closely with the government that the Indian people choose in the upcoming elections”, the statement added.

The US revoked Modi’s visa in 2005 under a law barring entry of foreign officials seen as responsible for “severe violations of religious freedom”. He has not applied for a US visa since then.

Since Modi’s emergence as a national leader, the US business lobby has reached out to him. Three Republican lawmakers accompanied a US business delegation that met him in Ahmedabad last year. A senior US diplomat also attended that meeting.

On the issue of granting Modi a visa, the State Department has said that the BJP leader was “welcome to apply for a visa and await a review like any other applicant”.

The US and India have forged friendly ties with bilateral trade close to $100 billion.

The meeting was facilitated by the external affairs ministry, which had received a request some time ago to arrange it.

In his reaction, Khurshid, speaking to Times Now channel, said: “There is a person today who was in office then, and who wants a larger office. Should he not explain?”

“Someone seeking a high office, who was responsible, and over whose watch these things happened owes one word of explanation, if not an apology,” he added.

Tiwari said: “The 2002 Gujarat chapter won’t end, and neither will the people’s perception change.”

Among Western envoys who have met Modi are German Ambassador Michael Steiner and British High Commissioner James Bevan. The European Union was the first to end the boycott of Modi.

Jack Ma says 1 million masks and 500,000 coronavirus testing kits are on the way to the US