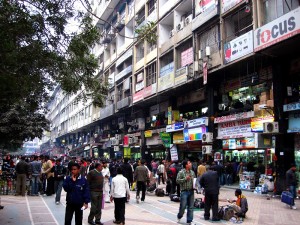 Washington, Feb 13 (IANS) The US has listed six markets in India, including Nehru Place and Gaffar Market in New Delhi, as “notorious markets” in global piracy and counterfeiting of American products in violation of intellectual property rights (IPR).

Manish Market and Lamington Road in Mumbai, and Chenoy Trade Centre and the Hong Kong Bazar in Hyderabad were also listed among the “notorious” in a report released Wednesday by the US Trade Representative’s office (USTR).

“Nehru Place continues to be a prominent example of the numerous markets in major cities throughout India that are known for dealing in large volumes of pirated software, pirated optical media containing movies and music, and counterfeit goods,” the report said.

“Gaffar Market is rife with counterfeit clothing, shoes, cosmetics, electronics, and other products, most of which are imported into India,” it said.

“The markets we have identified unfairly take from these American workers, diminishing the value and saleability of their work and threatening their jobs,” he said releasing what was described as “Out-of-Cycle Review of Notorious Markets”.

“And some of the counterfeit goods sold in the identified physical markets, from medicines and personal care products to automotive parts, can even threaten the health and safety of consumers,” Froman said.

“The marketplaces identified here warrant the immediate attention of our trading partners,” he added.

“Markets such as Manish Market and Lamington Road in Mumbai are semi-organised markets where unauthorised copies of CDs and DVDs (mostly of Hindi movies but also English-language movies) are sold alongside the authorised versions,” the report said.

According to reports, shop operators generally are successful at hiding illicit merchandise prior to police raids, and returning it to shelves shortly after a raid, it said.

The report comes amid a two-day hearing by the US International Trade Commission on “Trade, Investment, and Industrial Policies in India: Effects on the US Economy”.

USITC is conducting the investigation at the behest of the Senate Committee on Finance and the House Committee on Ways and Means.

The commission will deliver its report to the committees by Nov 30.