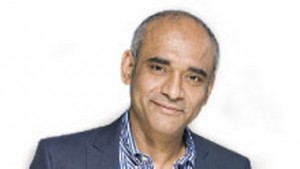 Washington, April 23 (IANS) In what has been dubbed as a David vs Goliath case, an India-born technocrat has taken America’s largest broadcasters, who claim his start-up’s television streaming service is a theft, to the Supreme Court.

The apex court Tuesday heard arguments from the attorney of Aereo, an online TV platform founded by Chaitanya ‘Chet’ Kanojia, in defence of the legality of its television streaming service and explaining the logic underpinning it. The arguments summarised two years of legal tussling between Aereo, which provides streams of local television stations to paying subscribers, and the owners of those stations, according to CNNMoney.

The TV station owners, major media companies like Disney and CBS, say that Aereo is violating copyright by allowing “public performances” of shows. Aereo says it is only enabling private screenings, just like off-the-shelf TV antennas do.

Several of the justices, in their questioning, repeatedly expressed concerns that a broad ruling against Aereo would imperil the nascent cloud computing industry because of how Aereo works, CNNMoney said. They seemed to search for a way to avoid that outcome, it said.

The justices are expected to issue a ruling by early summer. The formal issue before the Supreme Court is “whether a company ‘publicly performs’ a copyrighted television programme when it retransmits a broadcast of that programme to thousands of paid subscribers over the Internet.”

Using thousands of miniature TV antennas, Aereo scoops up the freely available signals of local stations. Then it delivers the signals to smart phones, tablets or computers via the Internet. Subscribers pick what to watch through a traditional on-screen guide.

They can also record shows and stream them later.

The outcome of the case could have important implications for Internet streaming, cloud computing, and the future of the TV industry itself, Time magazine said.

“If the Supreme Court rules that Aereo’s service is legal, the decision could throw a wrench into the highly lucrative broadcast business model, in which cable and satellite companies pay billions to the TV companies for the right to broadcast popular programming,” it said.

Such retransmission fees are projected to reach $4 billion this year and $7.6 billion by 2019, Time said citing research firm SNL Kagan.

Last year, two federal courts agreed with Aereo’s argument that it is transmitting thousands of legally protected “private performances” that individuals have captured using their own leased antennas housed in Aereo’s antenna farms.

But in February, a federal judge in Utah sided with the broadcasters, intensifying the legal uncertainty surrounding Aereo.

“Based on the Cablevision remote DVR verdict, a one-to-one relationship between the consumer’s copy or the antenna driving the stream to the consumer is what the law requires,” Aereo CEO Kanojia told TIME in a recent interview.

“We looked at that verdict and set out to comply with the law to the fullest extent possible, and we created a great technology that is solving a real consumer problem and bringing choice to the marketplace,” he was quoted as saying.

Adi Yogi – The Beginning of Yoga