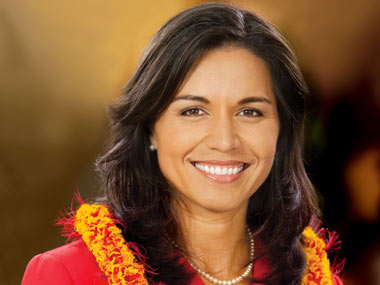 New Delhi, Jan 4 (IANS) US Congresswoman Tulsi Gabbard, the first Hindu member of the US House of Representatives, feels the relationship between India and the US has been energised after Prime Minister Narendra Modi’s visit and wants the two governments to work closely in countering terrorism, including cyber terrorism.

“Terrorism is an enemy and a threat that doesn’t wear one country’s uniform or owe allegiance to one country’s flag, but rather exists in many different parts of the world. In order to defeat this threat, we (India and the US) will have to work together,” Gabbard, the first Hindu member of the US House of Representative, told IANS in an interview during a visit here.

“..And that includes the government and leadership of Pakistan taking a stronger stand and action against these terrorists,” Gabbard added.

She hoped that Prime Minister Narendra Modi and US President Barack Obama, during his visit here for the Jan 26 Republic Day celebrations, would discuss the urgency to press upon Pakistan the need to take the terror threat more seriously.

“Both our countries are focussed on security. Both are focussed on countering terrorism dealing with the growing threat of Islamic extremism . We must focus on seeing how we can collaborate to better defend ourselves against the cyber attacks that are increasingly becoming a threat,” said the 33-year old, who is a combat veteran and also an ardent follower of the Bhagavad Gita.

Noting that Modi’s maiden visit to the US in September “energized the relationship between the two countries”, Gabbard said he had come with “a very clear vision and a plan to achieve his objective of where he would like to take India”.

She said Modi’s vision struck a chord not just with the Indian diaspora but generated interest “from people involved with politics, in the private sector and those who are looking to participate in what appears to be a very exciting time here in India”.

Gabbard, who was in India between Dec 16, 2014, and Jan 3, 2015, and met with Modi, Defence Minster Manohar Parrikar and Goa Chief Minister Laxmikant Parsekar among a host of other leaders, said she always nurtured a special place for the land of Lord Krishna’s birth and hoped for greater understanding and respect for each others’ culture, traditions, and distinct style of doing business.

Gabbard was born into a multi-cultural and multi-religious family of parents with Samoan and European roots. Fourth among five siblings, Gabbard embraced Hinduism as a teenager and became a student of the Bhagavad Gita.

Drawing upon the relevance of the Gita in international politics, she said the teachings in the scripture “about karma yoga and bhakti yoga have great relevance in the world today for each of us individually as well as in tackling the great challenges that we face around the world.

“His (Lord Krishna’s) teachings are relevant today as they were before and they always will be,” Gabbard said.

Reflecting on her 18-day-long stay in India, Gabbard said she enjoyed the trip and found it “very productive on many fronts”.
While touring seven cities across India, this devotee of Lord Krishna said her visit to Vrindavan, Krishna’s birthplace, was more like spiritual rejuvenation.

Goa was one state that attracted her for its immense potential in a tourism-centric economy just like her own home state of Hawaii.

“I have always had a fancy for India as the birthplace of Lord Krishna. And I have also spent a lot of time with Indian Americans back home who come from many different parts of India. When I came to India, it felt like I had already been there. There is a lot more to see and I look forward to visiting again in the near future,” Gabbard said.