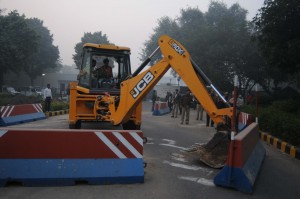 Delhi Police removes barriers which were placed by it in front of US Embassy in New Delhi.

New Delhi, Dec 17 (IANS) A new tough-talking India Tuesday upped the ante against the US and sought an “unconditional apology” over the arrest and humiliating strip-search of its ranking diplomat Devyani Khobragade in New York and also took a slew of steps to pare down the privileges of American diplomats here in a retaliatory measure.

Describing the treatment of Khobragade as “barbaric and despicable”, India sent a formal communication to the US asking its diplomats in the embassy and four consulates to surrender their Diplomatic Identity Cards issued to them and their families.

India has withdrawn all airport access passes for consular officials and import clearances for the embassy. This helped them to import liquor without paying customs fees.

The airport pass helped US diplomats and their families to enter the airport without security checks. They would now be required to request for airport passes each time they take a flight, said officials. Indian consulate staff in the US are not given airport passes.

According to informed sources, India could also consider taking action against gay US diplomats who bring along their same-sex partners as homosexuality has now been criminalised by the Supreme Court (see IANS story).

Parliamentary Affairs Minister Kamal Nath, asserting that India was not a “Banana republic”, said the US should tender an “unconditional apology” to India over the public humiliation of its diplomat and that “more steps need to be taken to awaken the US (because) it’s (now) a changed world”.

Sending a clear message of its anger, Congress vice president Rahul Gandhi and union Home Minister Sushilkumar Shinde Tuesday declined to meet a US Congressional delegation. On Monday, Lok Sabha Speaker Meira Kumar and National Security Advisor Shivshankar Menon had cancelled their meetings with the four-member US delegation of Democrat and Republican lawmakers.

BJP’s prime ministerial candidate Narendra Modi too declined to meet the US team.

The 39-year-old diplomat was strip-searched, confined in a cell with drug addicts and also subjected to DNA swabbing, sources confirmed to IANS.

The NSA described the treatment meted out to her as “despicable” and “barbaric”.

“It is the government who has send my daughter. It is a political issue between these two countries and my daughter is being made a scapegoat,” Devyani’s father Uttam Khobragade, a former bureaucrat, said here.

In further tough action, the Ministry of External Affairs Tuesday directed Delhi Police to remove the many security barricades outside the US embassy even though a police picket still remained. The barricades had for years restricted public movement around the embassy and normal vehicular traffic was particularly barred from the slip road in front of the embassy and the visa office at the back of the chancery.

India is also seeking details of the salaries paid to Indian staff employed in the US consulates, including those working as domestic helps with the families of American officials. The government has also asked for salary details of teachers at US schools here to see if they are paying tax.

Khobragade was charged with paying lower salary – in comparison to US standards – to the Indian help she had taken along.

She was accused by Manhattan’s Indian American US Attorney Preet Bharara of visa fraud and exploiting her babysitter and housekeeper. She was handcuffed in public by law enforcement authorities in New York last Thursday while she was dropping her daughter at school.

Khobragade was covered under the Vienna Convention for consular staff, which did not carry the same privileges as for embassy diplomats.