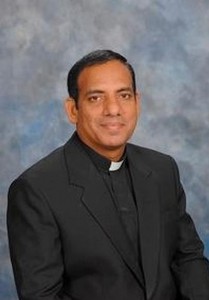 Washington, April 5 (IANS) An Indian priest who admitted to fondling a girl while attending dinner at her grandmother’s home in Minnesota has been sentenced to 25 years of supervised probation, according to media reports.

Father Leo Charles Koppala pleaded guilty March 17 to criminal sexual conduct charges involving a minor child and is likely to be deported to India, according to local CBS News.

Koppala, 47, was a priest of the Nellore Diocese in Andhra Pradesh in South India where he reportedly helped raise money to support an orphanage, according to Fairmont Sentinel.

Koppala was charged in the case in June 2013 and could have faced up to 36 years in prison.

He had been placed on administrative leave from the Diocese of Winona in southern Minnesota since June 10, 2013, but was permanently terminated from the ministry after Monday’s sentencing, the CBS said.

Koppala was taken into custody by the Department of Homeland Security and will remain in custody until his likely deportation.

He had been accused of sexually assaulting a 12-year-old girl June 8, 2013. The victim was spending the weekend at her grandmother’s house when the assault took place.

According to a criminal complaint, her grandmother invited Koppala over for supper and at one point in the evening the victim went downstairs to watch television.

Koppala later came down the stairs, pulled the victim up from where she was sitting and told her that he was glad to be away from her grandmother.

He then allegedly kissed the victim on the cheeks and lips and touched her inappropriately.

The victim said that Koppala also said that when she was done with school he wanted to come to her house so they could be free together and that he loved her, the complaint said.

According to CBS News, when the grandmother was interviewed she confirmed that Koppala had gone downstairs while she was on the phone.

She said that when they both came upstairs, she could tell by the victim’s demeanour that she was upset about something.

After Koppala left the victim told her what happened, the complaint said.

Under his sentencing guidelines, Koppala must register as a predatory offender and have no contact with females under the age of 18, CBS said.