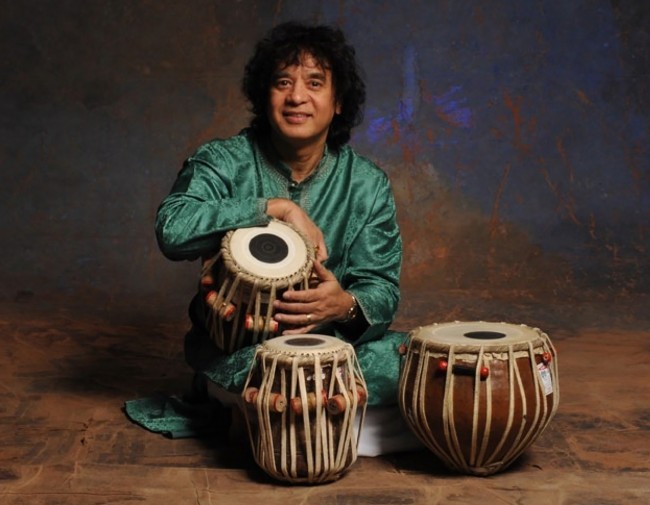 Kennesaw, GA: Tabla virtuoso and internationally-acclaimed percussionist Zakir Hussain will perform at Kennesaw State University on Saturday, March 17 with Indian flute (bansuri) player Rakesh Chaurasia. Presented as part of KSU’s Year of India, this special performance is a collaboration between KSU’s Division of Global Affairs’ “Year of” program and School of Music.

Zakir Hussain is renowned both in the field of percussion, and in the music world at large, as an international phenomenon and one of the greatest musicians of his time. He plays the tabla, a pair of small hand drums important in traditional Indian and Hindustani classical music. Widely considered a chief architect of the contemporary world music movement, his contribution to world music has been unique and groundbreaking; his many significant recordings and performances have featured collaborations with diverse and distinguished artists including George Harrison, YoYo Ma, Joe Henderson, Béla Fleck, and Van Morrison, to name a few.

The March 17 performance at Kennesaw Statewill also feature bansuri player Rakesh Chaurasia. The bansuri, a flute instrument made of bamboo frequently heard in Indian music, is characteristic of North Indian and Hindustani classical music. An exceptionally accomplished musician, Rakesh has received many national accolades throughout his career and has been featured in numerous performances and recordings with notable artists. In speaking about his upcoming performances with Chaurasia, Zakir says, “It is a pleasure to accompany Rakesh Chaurasia in concert, but I must say that sitting with him on stage instills a great sense of pride in me…to listen to him and hear his musicality, his point of view, and approach to the ancient art form in which he has received his training is really a breath of fresh air.”

For the past 34 years,Kennesaw State University has dedicated each academic year to the study of a particular country or region through its “Year of” program which seeks to introduce the KSU community to the rich diversity of world cultures. Kennesaw State’s 2017-18 “Year of India” is the latest of these award-winning programs that serves to engage local and global communities through a series of new courses and curricula, research projects, education abroad programs, lectures, performances, and other global partnerships.

Tickets for this performance start at $28. For more information and to purchase tickets, visit musicKSU.com.

As a master of his craft and international cultural ambassador, Zakir Hussain has been recognized countless times throughout his career for distinct contributions in his field and beyond. Hussain’s awards and honors include the titles of Padma Bhushan (2002) and Padma Shri (1988) given to civilians of merit by the Indian government, the Indo-American Award (1990) in recognition of his outstanding cultural contribution to USA-India relations, the Sangeet Natak Akademi Award (1991) presented by the President of India and India’s government cultural institute, the United States’ National Heritage Fellowship (1999) given by the National Endowment for the Arts as the agency’s most prestigious honor for a master in the traditional arts, top honors for Best World Musician in Modern Drummer magazine (2007) and Drum! magazine’s Best Worldbeat Drummer (2007), the 2009 GRAMMY® Award in the Best Contemporary World Music category, among many others.