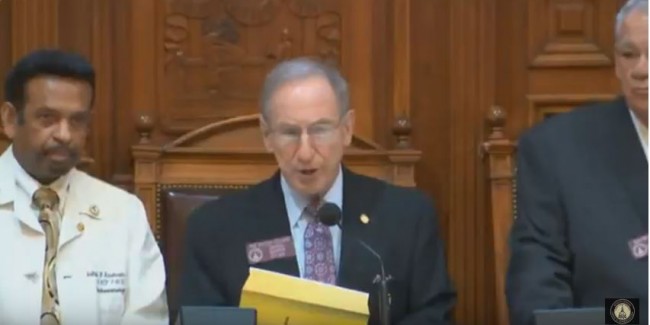 Atlanta, GA, March 7, 2018: For the first time in the history of Georgia State’s Legislature, an American of Indian heritage was awarded with the distinguished honor of having a day declared after his name, for his impeccable service to the nation and state. Dr Indran Indrakrishnan, a gastroenterologist practicing in Lawrenceville, with a dual faculty appointment as a clinical Professor of Medicine at both Emory University School of Medicine and Philadelphia College of Osteopathic Medicine received this honor on February 14, 2018, Valentine’s day, at the Georgia State Capitol.

At the Georgia House of Representatives, speaker David Ralston invited House Education Committee Chairman and representative Brooks Coleman to introduce Dr Indrakrishnan and award the resolution certificate to him.

Chairman Brooks Coleman, in his remarks, praised Dr Indrakrishnan for his service to the community in many aspects beyond his medical practice which includes education, philanthropy and advocacy. He described Dr Indrakrishnan’s astronomical roles in many state and national not for profit organizations. He recalled Dr Indrakrishnan’s passion in preventing and curing colorectal cancer- the second most common cause of cancer deaths in the country. He quoted various incidents where Dr Indrakrishnan helped many individuals and organizations during their dire needs. He then proudly declared February 14, 2018 as Indrakrishnan Day in Georgia and presented the resolution to Dr Indrakrishnan in the midst of resounding applauds from the legislators on the floor and the public in the gallery.

Dr Indrakrishnan in his acceptance speech, thanked the legislators for their kind recognition of him. He appreciated the support of legislators from both sides of aisle whenever he approached them to resolve issues related to the welfare of the community.  While talking about healthcare, he reminded the legislators to pay attention to their own preventive healthcare beyond going to doctors’ offices only to treat sicknesses.

Thus, February 18, 2018 has become a historically important milestone date for the Indian-American community inGeorgiawith this unprecedented honor bestowed upon Dr Indrakrishnan by the Georgia Legislative Assembly.