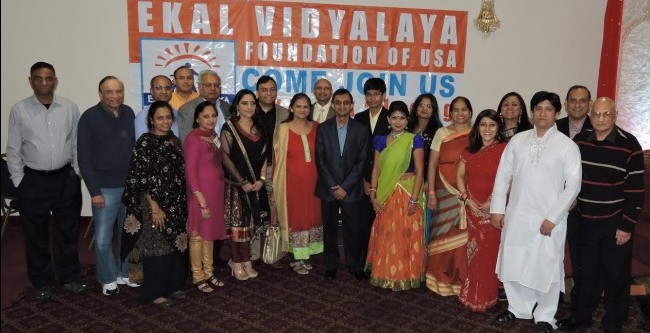 Atlanta, GA: Ekal Vidyalaya Foundation of USA’s “Shaam-E-Sangeet” program was held at theI mpact Center of the Global Mall, Norcross, Georgia, on Sunday December 7, 2014. The program which showcased Atlanta’s well known, altruistic and popular Geet-Rung School of Dance and Music’s talented artists’ delightful presentation of old classics, ghazals, new upbeat numbers and a vibrant grand finale was well attended by the music-lovers of Atlanta who vied with each other to donate a record number of schools in one night! 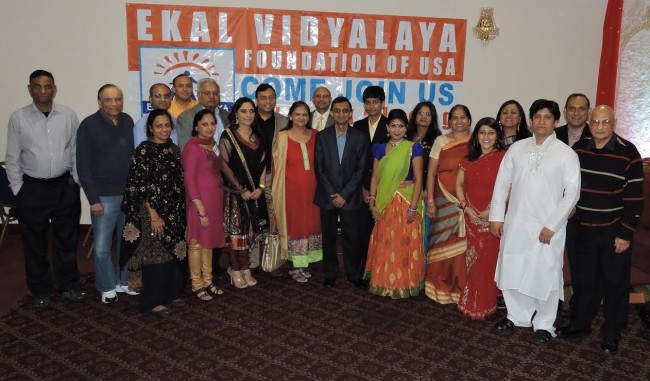 It was a perfect Sunday evening. After a delicious dinner, the audience was abuzz with excited anticipation of the song and dance feast that was to follow. And they were not disappointed. The talented singers mesmerized them with sweet melodies of renowned singers like Lata Mangeshkar, Kishore Kumar, Mukesh, Rahat Fateh Ali and Pankaj Udhaas. Rachna Gupta, gracefully and enthusiastically emceed the program. Divya Srivastava, Dance Director of Geet-Rung School of Dance and Music, lit the ceremonial lamp and commenced the evening’s program with a scintillating invocatory Om Namah Shivayah dance. 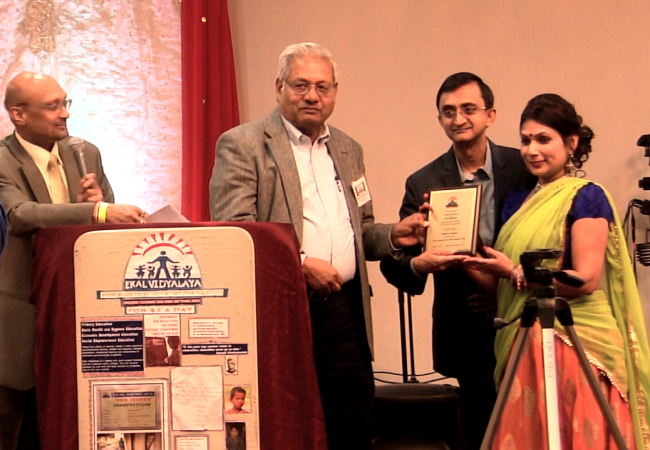 Ekal’s slide show, presented by Rachna Gupta, highlighted the one-teacher school model which exists in all the Indian states, from Kashmir to Kerala, on an annual donation of only $365 providing basic education to nearly 20-30 students during the week and empowering the village adults through its saptahik paathshaala, or Sunday classes. Ekal currently runs 54,366 schools benefitting 1.52 million students, with an almost equal boy-girl ratio.

Audience members were vying with each other to donate schools. When one sponsor donated 5 schools and challenged someone to match it, it was matched immediately and then almost instantly another sponsor doubled it to 10 schools! Such was the energy in the room that soon thereafter several sponsors came in with 1 – 3 schools. Sadhana Windlass, a local artist, had donated her oil painting to Ekal as a token of appreciation to the legacy of free education started by her great grandfather. As she wished it was raffled to someone who understood Ekal’s message and sponsored a school at the event. Ekal encourages local artists to showcase and donate their talent much like the talented Monika Mittal had done in 2012 with several paintings made especially for Ekal and gifted to school sponsors at the end of the program.

With the 100 schools sponsored at this hugely entertaining night, Ekal, with its focused and dedicated officers and volunteers is slowing but surely inching towards its goal of 100,000 vidyalayas. Shiv Aggarwal, Atlanta Chapter President and Chander Aggarwal, Regional President gratefully thanked all the sponsors, donors, volunteers and supporters for lending a helping hand to Ekal. Shiv said they were not merely sponsoring a school but were actually engaged in nation-building because their support was going to bring all-round development in far flung villages inIndia. Rotary Club of Lake Spivey was recognized as a long-time supporter which has  a “matching program” much like the program that some of the largerUScorporations have. Other clubs and organizations were also urged to join hands with Ekal to make it a much stronger movement.

All sponsors get a tax-deductible receipt and can track the progress of their school or donate at www.ekal.org. All in all, it was a well-organized, exuberant and much appreciated program in the festive month of December for a very worthy cause!