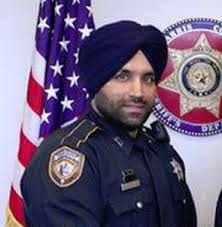 Washington, Feb 7 (IANS) In one of the biggest goodwill gestures to one of the largest communities in the US — the Sikhs — the state of Texas has allowed on-duty Sikh officers to sport essential Sikh religious symbols like beards and turbans.

According to a Washington Post report Friday, the decision of the county sheriff of greater Houston fulfilled one of the long standing demands of the Sikhs and made the county’s police force one of the first few in the nation — along with those in Washington DC and Riverside, California — to permit Sikhs to wear their “articles of faith” on patrol.

“By making these religious accommodations, we will ensure that (our) office reflects the community we serve, one of the most culturally rich and diverse in America,” Sheriff Adrian Garcia said in a statement.

“Deputies need to not only understand, respect and communicate with all segments of the population, but represent it as well,” he added.

“With this policy, one of the largest sheriff’s offices in the country has affirmed that a person does not have to choose between their faith and a career of service,” said Jasjit Singh, executive director of SALDEF in Washington.

The group’s Houston representative said the move would help the law enforcement agency to “attract the best and brightest from across our community…”.

Many of them are middle class, educated professionals in a wide range of occupations.

Their numbers have grown significantly since the 1970s, with large concentrations in urban areas, including New York and Los Angeles. Community leaders said that there were about 10,000 Sikhs in the Houston region alone.

Because of their turbans and beards, Sikhs have often been mistaken for Muslims and have faced harassment and attacks, especially after the 9/11 attacks.

In 2012, a white supremacist gunman attacked a Sikh temple in the state of Wisconsin, killing six Sikh worshippers.

In Houston, a confrontation with deputy sheriffs at the home of a Sikh family in 2008 was the original impetus for Sheriff Garcia’s outreach towards Sikhs after his election in 2009.

The family called to complain of a burglary, but deputies who arrived were reportedly alarmed to find men in the home wearing beards and turbans and carrying small ceremonial swords. They called for extra officers and began interrogating the family.

“All that is in the past now,” said Bobby Singh, a SALDEF official in Houston. Garcia, he said, sought to make a fresh start with the Sikh community and other foreign minority groups in the diverse metropolitan area.

“Now we have more opportunity to serve in law enforcement. It’s a win-win for everyone,” he said.