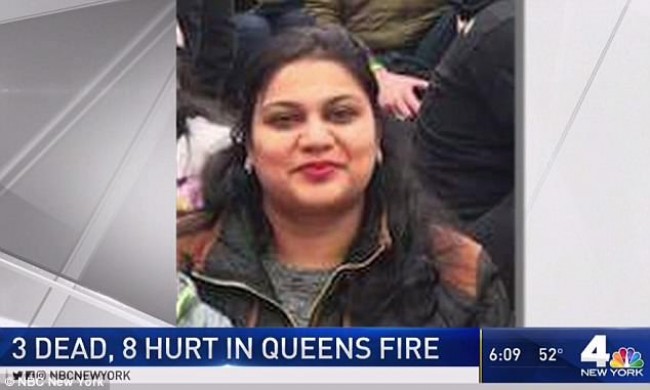 New York, April 30 (IANS) A heroic Indian-descent woman has died here along with her parents while trying to save others in a burning house.

Police identified the woman as Harleen Kaur, 32, and her parents as Pyara Kainth, 87, and Ragvir Kaur-Kainth, 82.

Eight others, including her two children whom the woman first saved, were injured in the blaze that started around midnight on Saturday. The injured were hospitalised on Sunday.

Harleen Kaur’s brother Param Singh told ABC Channel 7 TV that she had managed to come out of the burning house with her two children but ran back inside to help save others.

The eight hospitalized persons included an eight-year-old girl and a six-year-old boy.

Officials said that three of the injured were in critical condition.

The fire in the Queens Village neighborhood of the city, which has a large immigrant population, took 138 firefighters and over 90 minutes to put it out, officials said.

The cause of the blaze was being investigated but Fire Department Deputy Assistant Chief Michael Gala told reporters there was no immediate indication of anything suspicious.

Singh told CBS Channel 2 TV that 11 members of the extended family had gathered in the house to celebrate an upcoming wedding.

“It was my parents, grandparents, uncle, my aunt, my brother-in-law, my sister, my nephew, my niece” who were in the house, he told the TV station.