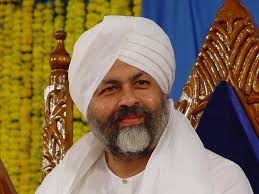 Atlanta, GA, May 13: Baba Hardev Singh, spiritual head of Sant Nirankari Mission, died in a road accident in Montreal in Canada, an official of the organization said on Friday. The mission has an active center in Atlanta.

Kripasagar, press and publicity in-charge of the mission, said the mission was deeply saddened by the news of Baba Hardev Singh’s death. He was 62.

“It was sudden,” Kripasagar told IANS.

Bharatiya Janata Party leader Shahnawaz Hussain condoled the death. “Baba Hardev Singh’s demise is a loss to the nation. He was doing a lot of service for the people.”

Sant Nirankari Mission Atlanta has been very active in organizing blood drives and other events in the city.
The Sant Nirankari Mission which is also called Universal Brotherhood  is not a religion but a mission for Humanity and a way of life that teaches how to become a human being that God intended us to be, said a press release issued by the mission after an event last year.
Nirankari Baba Hardev Singh Ji is respected the world over for preaching the message of human unity, equality and fraternity. He has been recognized for his selfless service and been honored with prestigious awards such as Mahatma Gandhi Sewa (service) Medal and Ambassador of Peace Award. Babaji was also a chief guest in the European parliament comprising of twenty seven nations in France, where he spoke about the peaceful & tolerant coexistence of all the different sections of society, the press release added.