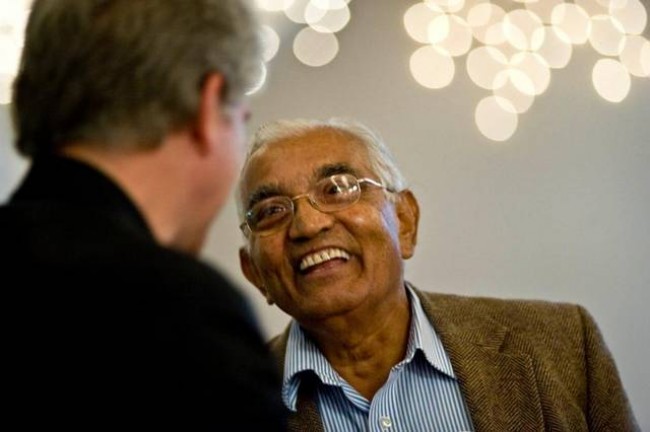 New York, May 13 (IANS) The 83-year-old father of Ami Bera, the only Indian descent Congressman, has pleaded guilty to illegally funding his son’s election campaigns with at least $260,000. putting at risk his reelection in November.

Assistant Attorney General Leslie R. Caldwell announced Tuesday that Babulal Bera admitted to making contributions to Ami Bera’s two election campaigns fraudulently in the names of other people and over the legal limit.

Prosecutors have cleared Ami Bera of involvement in the campaign funding scam, but it makes his reelection prospects harder as he is already facing opposition in his constituency from trade unions in his own Democratic Party. He was reelected to a second term in 2014 by less than 1,500 votes after a bruising campaign. The race was the costliest House of Representatives campaign that year with the two parties together running up a tab of $21 million.

Federal prosecutor Phillip A. Talbert told reporters on Tuesday that there was “no indication” that the Democratic Representative or his staff were involved in the illegal election financing and that they had cooperated with the prosecutors.

Ami Bera, a medical doctor who represents the from the 7th California District in the state capital area, told the Sacramento Bee newspaper that he had no idea that his father had illegally financed his campaign. He said that he has sent the money contributed by his father to the US government.

In 2010 Ami Bera lost his first election campaign for the House of Representative for which his father, a retired chemical engineer, contributed $240,000. The successful 2012 campaign received $40,000 from his father.

Babulal Bera was charged in the federal court for the Eastern California in Sacramento before Judge Troy L. Nunley, who is to sentence him in August. He faces a maximum sentence of 10 years on two charges, but is unlikely get the harsh penalty given his age. The Los Angeles Times reported that the prosecutors are recommending a prison term of upto 30 months.

Court papers said that Babulal Bera asked about 90 friends and relatives to send over 130 contributions to his son’s campaign in their own names and then he reimbursed them so that he himself will not appear to have exceeded the legal funding limits.

He is the third person of Indian descent to run afoul of the election laws in the past two years. Conservative author Dinesh D’Souza was convicted in 2014 of illegally contributing $20,000 to the unsuccessful Republican Senate campaign of his college friend, Wendy Long. Although New York federal prosecutor Preet Bharara sought a jail term, the judge gave him a $30,000 fine and eight months of community confinement that allowed him to continue working.

Sant Singh Chatwal, a hotelier, pleaded guilty in 2014 to making illegal contributions of $188,000 to three candidates and was fined $500,000 and sentenced to 1,000 hours of community service. In an unusual move, the federal prosecutor in Brooklyn at that time, Loretta Lynch, did not disclose who received Chatwal’s illegal contributions. Media reports, however, identified one of the recipients as Hillary Clinton who received them when she ran for Senate. Lynch is now the US Attorney General.

The scandal casts a shadow on Ami Bera’s reelection bid in November when he will face the Republican Sacramento County Sheriff Scott Jones. He is up against serious opposition within his own party because of his support for President Barack Obama’s Trans Pacific Partnership (TPP) Agreement, which trade unions consider anti-labour.

Because of trade union opposition he was unable get the endorsement of his local party unit to run for reelection and he had to get the backing of the state party convention. Unions have held protests against him in his district and vowed to defeat him as they say 12-nation TPP will lead to loss of jobs and lower wages in the US because of the cheaper imports it will allow.

Ami Bera’s 2014 victory was a nail-biter. On election night he was about 3,000 votes behind Republican Doug Ose, but as postal and other ballots were tallied over a two-week period he emerged the winner by just 1,432 votes.