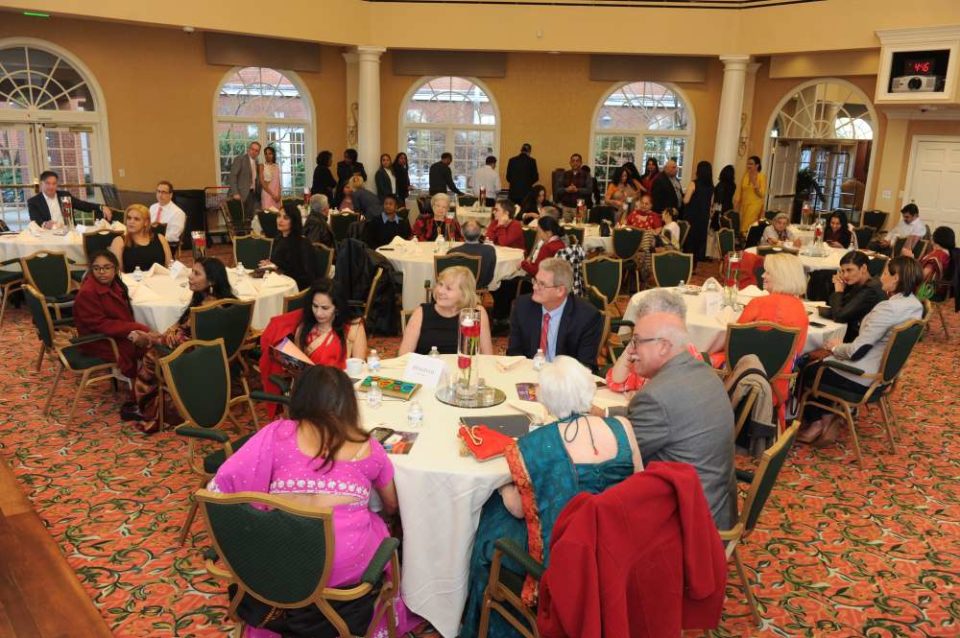 Atlanta, GA, February 24, 2020: Have you heard of the term Kintsugi? It is the art of beautiful repair, an ancient philosophy of restoring broken pieces back together with gold, creating something stronger than before. In a social and political landscape where women are still under-represented, the world is in need of a Kintsugi that is dedicated to restoring and rejuvenating broken women. And that effort was made in Atlanta towards that kind of Kintsugi.

Swimming against the current, historically, women have had to speak louder to get their voices heard. In the words of Virginia Woolf, they’ve had to create a room of their own. The NRI Pulse Benefit Calendar Signing fundraiser provided a platform to celebrate the women who found that room and also raise funds to advocate causes that propel more women to create their own.

International Women’s Day dawned early in Atlanta, on February 15, 2020, when inspirational stories of trials and triumphs of the women of Saris to Suits 2020 permeated the Pavilion of Kingsbridge retirement home. The Kintsugi raised money for Saris to Suits to establish a legal fund for victims of domestic and sexual abuse. Donation of venue, food, décor and photography meant that almost all of proceeds from the evening, save for small expenses, went to the fund.

The event featured 97-year-old role model Frances M. West, who graced the calendar in the month of the April, along with Veena Rao, Editor-In-Chief and Publisher of NRI Pulse.

The hall reverberated to the rich vocals of Raji Venkat, who had the audience spellbound to three of the opera pieces she presented. The Coloratura Soprano, Opera singer and Bharatanatyam exponent, who featured in the month of September, Saris to Suits 2020 edition, garnered a well deserving opulent applause and standing ovation.

I had the distinct pleasure of creating and rolling out a video presentation that summarized the purpose of the Calendar showcasing various role models featured in the 2020 edition.

A silent auction featuring an array of items, donated by patrons also raised money for the cause.

I also had the honor of welcoming the guests and introducing Rao- illuminating her many services to the community and humanity.

In her keynote address, Frances West said, she had a desire for women to rise to their full potential and for children to live in safety.

Her humble beginnings in Trenton, South Carolina notwithstanding, West embarked on an efficacious journey defying social norm of her times. “As I grew up, few professions were open to females – a secretary, a nurse which was frowned upon, a school teacher if she were unmarried,” said West. She credits her progressive mother, who, even in the 1920s, encouraged her daughters to go to college.

West went on to graduate from Winthrop University, and traveled to New Orleans Seminary where she received her master’s degree. At the seminary, she met and married Ralph West, who held a PhD. The Wests’ moved to Nigeria as missionaries in 1945, having lived for two years in Benin City and Ogbomosho where they spent 28 years. West impacted the lives of many during her years in Nigeria. Her many accomplishments include starting a school for the blind that is world-renowned today.

“There was much discrimination against women. There was polygamy, female circumcision, child marriage and other customs that caused me anguish,” said West. An important part of her work was teaching seminary wives practical skills like nutrition and the importance of personal appearance to enhance their self-worth.

“I am pleased that women have made much progress in the US.  We are on the way but have not reached the goal of equal rights for men and women,” West noted.

Rao, in her address, said her journey as newspaper editor has also been a journey of personal growth. “And one thing I’ve learned, is that it is possible to turn your weakness into your strength.” She credited Frances West and Nancy Haden for encouraging her to cast aside her fears, stand up for herself and rediscover her potential.

“That was how NRI Pulse was born in 2006. Along the way, I’ve learned to speak up for myself and for those who are in my shoes,” Rao added.

Rao also spoke about her upcoming novel, Purple Lotus which is releasing in the US in September 2020. “Purple Lotus talks about domestic violence from an immigrant woman’s perspective. It personalizes an abused woman’s trauma and lack of choices, and the ways it erodes her feelings of self-worth. It talks about the lack of family support when she finally chooses to stand up for herself.”

“Domestic violence and victim blaming is common in our community. We need to create safe spaces where women can live their lives without fear of judgment and harm. And shame,” noted Rao, adding that lack of financial resources was one of the key factors that keeps a woman trapped in a bad situation. “Which is why,” she said, “we need a fund to support women who are caught in helpless situations.”

Tripathi spoke about her inspiration for her SarisToSuits signature calendar. “I thought, by putting the spotlight on other South Asian women who have succeeded, despite barriers, in achieving their American dream, the calendar would inspire women and girls to get educated and to stand on their own feet. My aim was to raise awareness about the unique nuances of our culture, to empower, protect, and inspire women and girls.”

Born Uttar Pradesh, India, Patti (Pratibha) Tripathi moved to the United States at the age of 12. In her 20s, she anchored for the global headquarters of CNN in Atlanta. A graduate in English literature and American studies from the University of Notre Dame, Tripathi runs a public relations company, TriPath Media in Atlanta, which she founded when she was one of twelve and the only woman to be accepted to an Entrepreneur Mentorship Fellows program at the University of Maryland business school with a requirement of launching a business.

As illustrious as her career was, Triapthi was not spared of her share of pitfalls.

“There is so much pressure on girls of South Asian origin to oblige by their parents’ wishes that many feel obligated to give up on love for an arrangement,” said Patti about her arranged marriage to an Indian-American ophthalmologist. “I was very well educated and had my dream career, but the three-year “marriage”, which a court ruled was legally invalid because there was no marriage license, was abusive, and I had to get out.”

“In 2007, I married a man I had been introduced to two decades earlier, after college. I loaned him money to help him buy into his medical practice, but the marriage didn’t last long, and when it ended, I literally had nothing,” recounted Patti.

Having lost her fiercely protective mom, Patti wished she had supportive women around her while going through a divorce with health complications. Having been featured herself in a calendar of smart female students from various communities during her days at NDU, fueled with a drive to transform lemons of her life into a lemonade culminated to Saris to Suits.

Rao expressed her gratitude to all sponsors, supporter and volunteers.

“We just established the Anu, Subra and Kiran Bhat foundation and we are so glad to donate to a cause the helps victims of domestic and sexual abuse,” said Gold Sponsors Dr. Anu and Dr Subra Bhat of the Bhat Foundation.  Bhat foundation is a not for profit organization dedicated to supporting academic scholarships, Healthcare related charitable causes and other noble charitable entities.

“ACS is very happy to support this effort that is so much needed in this and other communities,” said Cynthia Meyers, representing Silver Sponsor ACS Group.  Raj and Nita Sardana of ACS Group strongly believe in giving back to the communities. ACS Foundation initiatives run locally, nationally, and globally. To date, ACS Group has provided more than $80K worth of scholarships and technology to deserving girls.

“We are here to support a very great cause for all the women in need,” said Amy Sandhu, representing Silver Sponsor Publix, adding that she was honored to represent Publix for the cause. Publix supports organizations that focus on youth, education, reducing hunger, and alleviating homelessness through its Publix Community Giving Initiative.

Narendra Patel, owner of Atlanta’s favorite Indian restaurant Madras Chettinaad, said he was happy to sponsor the food to support a wonderful cause. Patel was seen mingling with guests, as they enjoyed the delicious appetizers from his restaurant.

Chennai Express was the other food sponsor, donating trays of tasty appetizers.

She also thanked King’s Bridge for the venue and all attendees who graced the occasion.

This International Women’s Day, we can only hope that this modest effort towards building a Kintsugi for women inspires more empowered women initiate more of such efforts towards empowering women who are unable to stand up against injustice. As Maya Angelou put it, “When you learn, teach. When you get, give.”