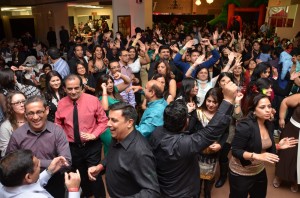 Atlanta, GA: One of the most rocking New Year Parties of 2014 was held by Atlanta Event Hall located in Venture Mall in Duluth, on Dec. 31 2013. The host and owner, Ramzan Virani, along with organizers Ashok Goyal, Dr. Saibaba Arcot, Nizar AliVirani, Zohra AliVirani, and Nizar Chhatriwala did a splendid job in organization and entertainment from the beginning to the end. There was not a minute of delay or boredom in terms of entertainment. Punctuality, organization, and enjoyment were the three key adjectives to describe the atmosphere. 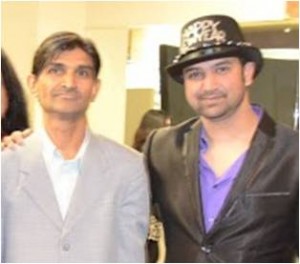 Guests were welcomed promptly and courteously into an ambience of red, gold, and silver lighting and were served a mouthwatering grand buffet with both veg and non-veg entrees. Without any delay, the event soon took off in full swing after dinner was served with a Zumba competition by Anisha Tajani followed by some sensational live singing and DJ by Shan Khan and singers Farheen Khan and Bhishma Oza, but it did not stop there. From ages three to 93, the dance floor soon became a smashing success with the live dhol and bangra performance by Jasmeet Singh, while these memories were captured by photographer Shehnai Arts.

Every little detail was taken into consideration, from a New Year photo booth to an open bar for social drinkers. For those who liked to sit and enjoy, seating arrangements were organized around the dance floor. For young couples with small children, a specially designated spot with a play-inflatable area was equipped with adult supervision, free of charge.