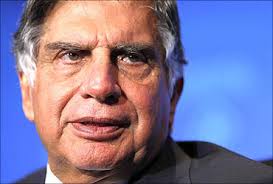 New Delhi, Aug 28 (IANS) A leadership deficit is aggravating the economic crisis in India, Tata Group Chairman Emeritus Ratan Tata has said adding that the country has lost the confidence of the world.

In an exclusive interview to television channel CNN-IBN, aired Wednesday, Tata said India needed leaders who lead from the front and the prime minister’s team and the political class needed to pull in one direction, and not pursue individual agendas above national interests.

“There are leaders whom I’ve respected all through my life for their public life. But something has happened that has diffused this leadership. We don’t have leadership that we have been talking about, that is leading from the front,” said Tata.

At the same time, Tata said his respect for Prime Minister Manmohan Singh continues to be very high.

“We are not consolidating ourselves in the government. We are not any longer looking at ourselves as one India.”

He said Manmohan Singh has held the country’s esteem high but in recent times that esteem had been lost. “We have lost the confidence of the world. We have been slow to recognize that in the government.”

He also said that the government has “swayed” under the influence of vested interests in private sector and policies have been “changed, delayed and manipulated”.

“So for one reason or the other, the government has swayed with those forces,” Tata said adding that if the policies were implemented as they were written, it would be good for the country.

Tata praised Narendra Modi’s leadership in Gujarat but refrained from commenting on his bigger role in national politics.

“I think in Gujarat he has proven his leadership and he has moved Gujarat into a position of prominence. I’m not in a position to gauge what he would do in a country,” he said.