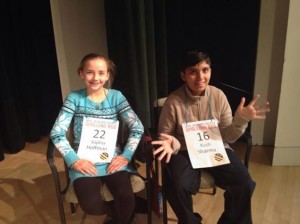 Washington, Feb 24 (IANS) An epic duel running into an astounding 66 rounds between a 13-year-old Indian-American boy and an 11-year-old girl in Missouri ended in a tie as the Spelling Bee organisers actually ran out of words.

The battle at a branch of the Kansas City Public Library Sunday was between Kush Sharma, a seventh-grader at Frontier School of Innovation, and Sophia Hoffman, a fifth-grader at Highland Park Elementary, CNN reported.

The original pool of 25 students was quickly whittled to just Kush and Sophia. The two will go head-to-head again March 8 for a spot in the Scripps National Spelling Bee in Washington.

Kush and Sophia burned through that list, as well as 20 other words organisers picked from the dictionary when they realised it was possible they might need more words, Mary Olive Thompson, outreach coordinator for Kansas City Public Library, said.

“The officials were fatigued. The kids weren’t tired. They had endless energy and were doing an amazing job,” she was quoted as saying.

Kush said he could not remember exactly what word was the hardest for him to spell — something French that started with an “R”.

He told CNN he would work hard for the rematch and would study every free minute of the day if he scores a place in the national bee.

“I’m looking forward to seeing how far Sophia can push me and how far my skills can go,” he was quoted as saying.

For Sophia, the most difficult word was schadenfreude, which describes the enjoyment one can get from someone else’s bad luck.

“Kush worked really hard. I wish we could both go (to the national competition),” Sophia was quoted as saying.

“We didn’t want to just go through the dictionary and give them more words,” Thompson said.

“We feared that someone would get a word that was too easy while the other would get an extremely difficult word.”

“We wanted to be a bit more calculated and neutral, and we wanted to give each an equal opportunity,” Thompson added.