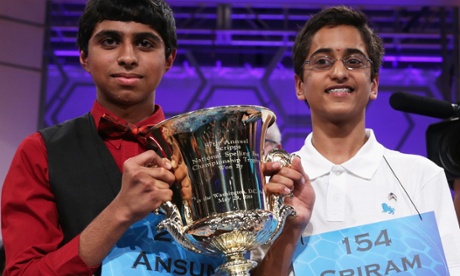 Washington, May 26 (IANS) The impressive performance of Indian Americans at the Scripps National Spelling Bee could be due to their perseverance, hard work, well-educated parents and a milestone documentary that made them realise “we could do this”, according to a media report.

“How hard a child works is a very individual factor… But what might be happening (with Indian American contestants) is that there might be perseverance for the National Spelling Bee goal over a longer period of time,” the Washington Post quoted Paige Kimble, the Bee’s longtime director, as saying on Monday.

The contest, which has been won by Indian Americans for seven years in a row and all but four of the last 15 years, gets underway on Tuesday.

In fact, Kimble’s analysis could not be misplaced as of all the Indian American champions in the last 15 years, only one, Pratyush Buddiga, won the contest in his first attempt in 2002. The others, including last year’s co-champ Sriram Hathwar, won after making several attempts.

But Kimble is concerned about the racial aspect of the contest. Last year’s champions had to face a barrage of racist comments on social media websites that “indicate that we have a long way to go as a country in embracing all of our immigrant population”, Kimble said.

Despite experts not sure as to how they can explain the impressive performance of Indian American youngsters in the national bee compared with other groups, Shalini Shankar, an anthropology professor at Northwestern University, said: “It’s hard to say it’s a coincidence.”

Another factor that contributed to the success of Indian Americans in the contest was a 2002 documentary, “Spellbound”, which followed eight contestants to the 1999 national bee and shows Nupur Lala’s exultant victory.

“A lot of the spellers I interviewed said that was the moment they realised, ‘We could do this’,” Shankar said. “So, if you count it down from when ‘Spellbound’ came out, it’s about a five- or six-year arc until they really started dominating. The reach of that movie has been much farther than people realised.”

But it is also thousands of hours of hard work that Indian American contestants put in to become champions.

“When the other kids are playing football or basketball, the Indians are doing spelling. I don’t think it has anything to do with Indians being innately better at spelling. It’s mostly just hard work,” said Pratyush Buddiga, who won the contest in 2002.

Thank you for the 'chai pe charcha': Obama to Modi