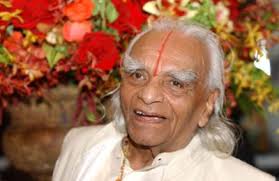 A widower, he was suffering from age-related ailments and breathed his last around 3.15 am.

The funeral will be held here later Wednesday.

Author of several books on Yoga, its practice and techniques, Iyengar was conferred the Padma Shri in 1991, the Padma Bhushan in 2002 and Padma Vibhushan in 2014 and was in 2004 named one of Time magazine’s 100 most influential personalities, among his many other national and international honours.

Prime Minister Narendra Modi condoled Iyengar’s death and said he will be remembered as a fine guru and scholar.

“I am deeply saddened to know about yogacharya B.K.S. Iyengar’s demise and offer my condolences to his followers all over the world,” Modi tweeted.

“Generations will remember B.K.S. Iyengar as a fine guru, scholar and a stalwart who brought yoga into the lives of many across the world,” he added.

Maharashtra Chief Minister Prithviraj Chavan expressed grief over Iyengar’s death, saying he would be remembered for his dedication to yoga.

“We have lost a versatile personality who popularized yoga,” Chavan said in a tweet.

Born Dec 14, 1918 in a poor Brahmin family of Bellur in Karnataka as Bellur Krishnamachar Sundararaja Iyengar, he was a sickly child, having fallen victim to malaria, typhoid and tuberculosis in his early childhood.

In 1934, when he was 16, the young Iyengar was introduced to yoga by his teacher T. Krishnamacharya as a cure for all his childhood illnesses, and after two years sent to Pune to propagate yoga as he understood some English.

Gradually, he developed the ‘Iyengar Yoga’, exploring the meaning of yoga sutras by his practical search and practice of Yoga, integrating the body, mind and emotions. This ‘astanga style’ is now recognized and followed by certified yoga teachers globally.

In 1943, he married 16-year old Ramamani and the couple had six children – daughters Geeta, Vinita, Suchita, Sunita, Savitha and son Prashant. Geeta and Prashant worked with Iyengar in teaching and propagating yoga till his end.

Over the years in his yoga practice, several eminent personalities became his disciples, including J. Krishnamurti, Jaiprakash Narayan, and Achyut Patwardhan.

In 1952, he had a chance meeting with the legendary violin maestro Yehudi Menuhin who introduced him to the western world and helped conduct a series of yoga lectures and demonstrations in Europe, US and other countries.

Among his prominent international students was Queen Mother Elisabeth of Belgium, whom he taught ‘sirshasana’ (head stand yoga posture) at her age of 80.

China’s Beijing Post issued a commemorative stamp in his honour in 2011, while Oct 3, 2005 was celebrated as B.K.S. Iyengar Day by San Francisco.

In 1975, Iyengar started the Ramamani Iyengar Memorial Yoga Institute in Pune in memory of his wife who died in 1973.

Among the books he penned were “Light On Yoga”, “Light On Pranayama” and “Light on the Yoga Sutras Of Patanjali”, all of them bestsellers.