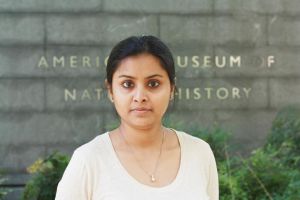 Bhubaneswar, Feb 20 (IANS) The pre-historic legacy of what is now the United States could be redefined thanks to an Indian-born scientist in a New York university who has identified fossils that may be as old as 400 million years through a technique that can benefit many other researchers.

“The techniques I developed and used for identifying fossils so old can also be used to help identify extinct species and enable scientists understand the natural and human causes behind crises in the biodiversity sphere and the collapse of ecosystem,” Rituparna Bose, an adjunct assistant professor at the City University of New York,” told IANS on the phone.

Bose, 33, who was born in Rourkela in Odisha, said she used geometric morphometrics – a relatively new method for measuring the shape of organisms – to study the very subtle differences between species and to better understand how they changed with time. Her work was centred on fossils that were found in Ohio and Michigan.

Today, classification of plant and animal species is usually based on visual assessment of external shape and size. In other words, organisms that look different from one another are grouped differently. Thus, scientists were finding it difficult to measure the subtle differences between species, especially where no genetic or behavioral data is available.

Part of her work was presented at the NAPC (North American Paleontological Convention) and published in the Proceedings of National Academy of Sciences, India, and in PalAontologische Zeitschrift, one of the oldest journals on fossil science.

“My research has been published in several acclaimed palaeontology journals and my dissertation was selected for the best thesis award by (prominent publisher) Springer in its ‘Best of the Best Thesis’ series,” said Bose, the first Indian to serve on the editorial board of the Journal of the Geological Society. She is also a Fellow of the Society of Biology and the Royal Society of Entomology.

“Most importantly, I hope that my work can contribute to an understanding of the reasons behind loss of biodiversity and as a starting point for conservation,” she added.

Her findings, which come at a time when 2011-2020 has been declared the UN Decade of Biodiversity, are based on studies she carried out at prominent US museums like the Smithsonian, the American Museum of Natural History and the Yale Peabody Museum.

Her work was funded by the Theodore Roosevelt Grant awarded by the American Museum of Natural History and the Dunbar-Schuchert Grant of Yale University.

Bose’s birthplace Rourkela is one of the richest fossil sites in the Indian subcontinent. She grew up in Kolkata (then Calcutta), the capital of neighboring West Benga statel.

“India has a rich history of prehistoric fossils, and our methods could be used to uncover this legacy,” said Bose, who also works with the (geology-focussed publisher) Wiley group and oversees the books published by the American Geophysical Union.

She has also been invited to serve on the editorial board of Cornell University’s Bulletins of American Paleontology, the oldest paleontology journal in the Western hemisphere, for her work.

“The best way to differentiate between species is by sequencing their deoxyribonucleic acid (DNA). However, DNA could not be isolated from these prehistoric fossils. That is why we used mathematical methods to study the diversity and evolution of species,” Arnab De, a co-worker and microbiologist, said on the phone.