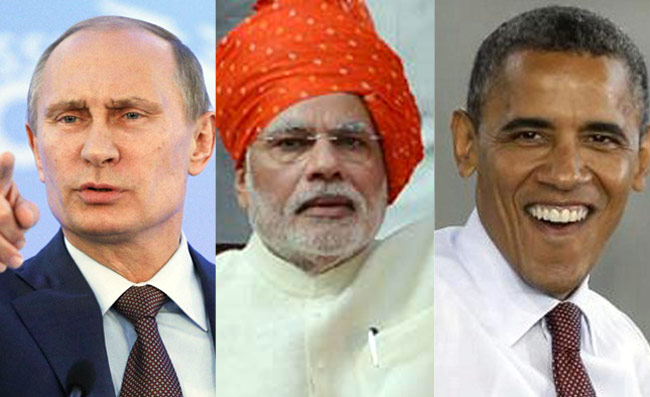 Washington, Dec 6 (IANS) The US says “now is not the time for business as usual with Russia” but insists Russian President Vladimir Putin’s upcoming India visit would not cast a shadow on President Barack Obama’s own trip in January.

“Let’s wait and see what comes from the visit,” State Department spokesperson Marie Harf told reporters Friday when asked about reports that a number of trade agreements on oil and gas as also a nuclear site may be signed during Putin’s India visit.

“I know there’s a lot of rumours, often of trade deals or economic deals, but let’s see what’s actually put into practice here,” she said.

But “as we’ve said before, now is not the time for business as usual with Russia,” Harf said. “We’ve conveyed this certainly to our allies and to our partners across the world.”

However, Harf said, the Putin visit was not casting a shadow on Obama’s visit to India in January at the invitation of Prime Minister Narendra Modi to be the chief guest at India’s Republic day.

“It’s not, not at all,” she said. “Broadly speaking, that’s our position on doing business with Russia.”

“But again, India is a very, very close partner. Let’s see what comes out of the actual visit, but we’re confident things will continue as they are.”

When told that India has been a very close partner of the Soviet Union before, and now Russia, Harf said: “Well, it’s possible to have good relationships with multiple countries even when we disagree on things.”

“But again, it’s not, to my knowledge, impacting any visits one way or the other,” she said.

The US is watching the Putin visit to India, she said as “we watch a lot of things that go on around the world. I wouldn’t express a large amount of concern, though.”

Regarding US-India civil nuclear cooperation, Harf recalled that during Modi’s September visit to the US, “both sides renewed their commitments to fully implement the US-India Civil Nuclear Cooperation Agreement, to find a way forward to allow US-origin reactors to eventually be built in India.”

The two leaders also agreed in their joint statement to establish a contact group for advancing the implementation of civil nuclear energy cooperation, she noted.

It will address administrative issues, liability, technical issues, licensing, and other topics as required, Harf said. “So there’s a path forward here for this to keep moving.”

In reply to another question about India’s dealings with Iran and Russia, the spokesperson said the US “certainly don’t turn a blind eye to any action that could be sanctionable when it comes to sanctions on any country.”

“That’s certainly not true,” she said. “We, in fact, have very vigorous sanctions enforcement and work very closely with our partners to ensure they can meet their obligations under international sanctions architectures.”