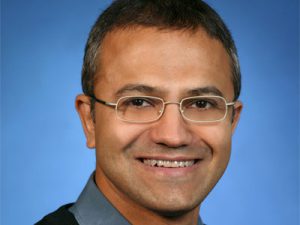 The company’s board of directors is also holding discussions to replace Chairman Bill Gates with lead independent director emerging as the prime candidate, Bloomberg News reported citing people briefed on the process.

Microsoft’s board was meeting Thursday night and an announcement was expected as soon as Friday.

Nadela, 47, who grew up in Hyderabad attended Hyderabad Public School in Begumpet[2] before getting a Bachelor of Engineering in Electronics and Communication from the Manipal University.

Nadella’s appointment would be interesting and possibly controversial for investors, Business Insider said noting that when Steve Ballmer stepped down it was because he thought Microsoft needed fresh blood.

Nadella, who has been with Microsoft for 22 years, since 1992, also ran Bing, and although Bing has never been Microsoft’s crown jewel, Nadella helped it grow, it said.

Ballmer moved him from Bing to run Microsoft’s $19 billion Server and Tools Business, pushing out long-time Microsoft exec Bob Muglia in the process.

Nadella was the one that helped bring some of Microsoft’s most popular technologies, like its database, Windows server and developer tools, to the cloud, called Azure, Business Insider said.

He also helped Microsoft bring a cloud version of Microsoft Office to the cloud, Office 365. Microsoft says Office 365 one of its fastest growing products ever.

Prior to Microsoft, he worked at Sun Microsystems, now owned by Oracle.

Should Ballmer and Gates depart, the software giant would be without its two most recognizable figures for the first time in its 39-year history, USA Today said. Microsoft has been searching for a new chief since Ballmer announced he was stepping down in August.

“If you were going to pick somebody who is an established Microsoft veteran, Nadella is the guy,” reDesign analyst Rocky Agrawal, a former Microsoft employee, was quoted as saying by USA Today.

“He seems like the best bet. I would have been really disappointed if they had picked Stephen Elop given what happened with Nokia.”