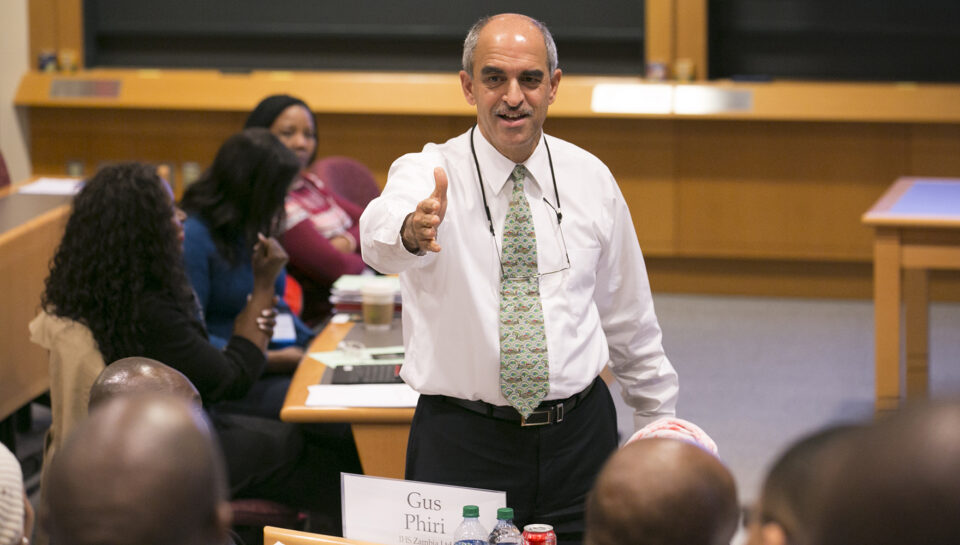 Mumbai, Oct 10 (IANS) When the news of the appointment of Srikant M. Datar as the new dean of Harvard Business School (HBS) flashed on Saturday morning, his thrilled friends, classmates, faculty and colleagues in Mumbai, Ahmedabad, Bengaluru, New Delhi and other parts of India erupted in collective joy.

There was a flurry of congratulatory messages, emoticons and hearty wishes as the 67-year old Mumbaikar is poised to head what is the world’s top business management institution from January 1, 2021.

Among those who were elated include Kandaswamy Bharathan, currently adjunct faculty at the IIM-Ahmedabad (IIM-A) and also at ISB, Hyderabad, and a batchmate of Datar at IIM-A from 1976-1978.

“Srikant richly deserves this prestigious position. Probably it was delayed, but we all are very pleased and excited. We wish him the very best in his new responsibility,” Kandaswamy told IANS.

Rakesh Basant, who is IIM-A dean, Alumni and External Relations, remembers Datar as a “thorough gentleman” who was a pleasure to interact with.

“I connected with him often when he was on the IIM-A Board of Governors for six years till 2018 and would attend meetings regularly. We both share a common interest in innovations… He is among our most celebrated alumnus, a multi-faceted exemplary all-rounder in academics and extra-curricular activities,” Basant told IANS.

Maharashtra Chief Minister Uddhav Thackeray also greeted Datar warmly, terming his new posting as “a proud moment for the people of Maharashtra”, while Maharashtra Navnirman Sena President Raj Thackeray said that this achievement would inspire Marathis all over the world.

Reminiscing on the good old campus days with Datar, Kandaswamy said as batchmates they had common courses related to finance and other advanced topics of economics and management, and worked together.

“In those days, a majority – over 90 per cent – of students at IIMs hailed from technical backgrounds, but we were both from non-technical fields, so it was tough for us,” Kandaswamy said.

But Datar remained unfazed and with his sheer commitment to excellence, put in the extra miles for all his courses, including the difficult ones, to excel so much that he became an ‘I-Schol’ or industry scholar, an honour bestowed on only five top students, which is sponsored by top corporates.

Little wonder that Datar, who was always cool, focused on his programme and strived for the best grades, made it to a top company, joining Tata Group’s TELCO from the campus, before leaving for Stanford University in 1981, Kandaswamy said.

“He was always very open to helping other classmates understand the complicated principles/formulae and could balance his time and efforts wonderfully,” Kandaswamy added.

Kandaswamy also remembers Datar’s love for his daily yoga regime, his favourite eggs and omelettes, tennis, and later at small outings like a dinner relished at the famed ‘Gordhan Thal’ near the IIM-A.

Along with several friends, Datar and Kandaswamy travelled on the Gujarat Mail from Ahmedabad to Mumbai for their annual vacations with great camaraderie enroute.

“Most could not afford flights, so we would take the train to Mumbai. I would halt overnight for the next day’s train to Chennai. We all enjoyed the train journeys, teasing each other, poking occasional fun at some of our teachers – with due respect of course – before going to meet our families,” Kandaswamy said.

Recalling a cherished memory, Kandaswamy said when he and his wife Pushpa visited Harvard in 2014, Datar was extremely busy, but he made it a point to spend almost half-an-hour with his old IIM-A batchmate.

Datar was always interested in films, but it was more from a business viewpoint, and spent a lot of time with Kandaswamy on understanding the topic, especially going deep while on a sabbatical from Harvard in 2011-2012 to spend a year in India.

“I had conceptualised and launched the first-ever course on ‘Business of Film Industry’ at the IIMs, and he was writing a book on redesigning management education. So we attended four mega-conferences in Ahmedabad, Kolkata, Chennai and Mumbai,” Kandaswamy said.

Born in 1953, Datar was schooled at the Cathedral and John Connon School. He then attended the St Xaviers College, qualified as a chartered accountant, worked with Tata Administrative Services and was attached to TELCO, did his doctorate in business (accounting) from Stanford University (1985), was in academics at the Carnegie Mellon and Stanford University. He has been at the HBS since 1996, which he will now helm from the next year.