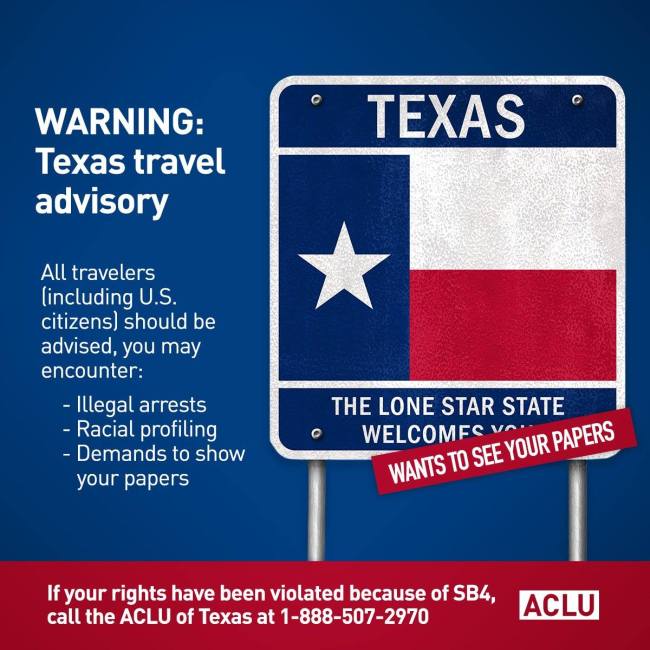 Chicago, May 10 (IANS) The American Civil Liberties Union (ACLU) has taken the unusual step of issuing a travel advisory to US citizens as well as visitors against travelling to the southern state of Texas — warning that “people of color” could be subject to profiling.

SB4 requires law enforcement agencies across the state to honour U.S. Immigration and Customs Enforcement (ICE) detainers. These are requests to hold someone in jail while their immigration status is checked out.

The SB4 legislation is in response to Texas cities like Austin, that have come under fire for resisting full cooperation with ICE agents. SB4 penalises police officers for the failure to detain and turn over undocumented immigrants to federal authorities.

ACLU officials stressed that the likely victims of the law, which takes effect on September 1, could be people of colour, and those who appear “foreign”, even if they are legal immigrants.

“The law gives a green light to police officers in the state to investigate a person’s immigration status during a routine traffic stop, leading to widespread racial profiling, baseless scrutiny, and illegal arrests of citizens and non-citizens alike presumed to be “foreign” based on how they look or sound,” the ACLU said in a statement.

Texas is one of the states which has a large and growing number of Indian Americans, along with other states like New York, New Jersey, California and Illinois. Houston, the fourth-largest city in the US, has grown into one of the most ethnically-diverse cities in the country.

Terri Burke, Executive Director of the ACLU of Texas, said the organisation plans to “fight this racist and wrongheaded law in the courts and in the streets”.

“Until we defeat it, everyone travelling in or to Texas needs to be aware of what’s in store for them,” Burke said. “The Lone Star State will become a ‘show me your papers’ state, where every interaction with law enforcement can become a citizenship interrogation and potentially an illegal arrest.”

Since Texas, the second-largest American state in geographical area, shares over 1,200 miles of a common border with Mexico, it has also had a large number of undocumented immigrants sneaking in.

Between 2008 and 2012, ICE requested local law enforcement to hold 834 US citizens, some of whom subsequently spent days in jail as a result. Under SB4, the state of Texas is placing the rights of its residents, including US citizens, in extreme jeopardy, ACLU officials said.

“Texas is a state with deep Mexican roots and home to immigrants from all walks of life. Many of us fit the racial profile that the police in Texas will use to enforce Trump’s draconian deportation force,” said Lorella Praeli, Director of Immigration Policy and Campaigns for ACLU.

Over 16 percent of the Texas’s residents are foreign-born, and with an estimated 1.2 million undocumented residents, Texas’ undocumented population is second only to California in size, according to the Migration Policy Institute.

Critics say that border patrol agents have often violated the safeguards contained in the American constitution. The Fourth Amendment of the US Constitution protects Americans from random and arbitrary stops and searches. Federal government agencies, however, contend that these basic constitutional principles do not apply fully at American border crossings, called “ports of entry”.

Moreover, federal regulations give the US Customs and Border Protection (CBP) authority to operate within 100 miles of any “external boundary”. In this 100-mile zone, Border Patrol agents have certain extra-constitutional powers and can operate immigration checkpoints.