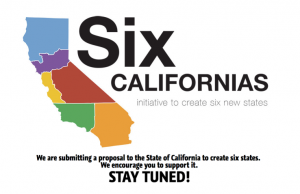 Washington, Feb 23 (IANS) It isn’t India alone that faces moves to split big states for one reason or another. If a venture capitalist has his way California, America’s largest state, would be split into six separate states with Silicon Valley, home to many Indian techies, turned into its very own state.

Last week tech Investor Tim Draper, a VC behind such brands as Skype and Hotmail, gained some traction for his libertarian pipe dream of “Six Californias” with the state approving his initiative to begin collecting petition signatures to put it on ballot.

The proposal needs the signatures of 807,615 registered voters by July 14 to qualify as a ballot measure in November’s elections, according to California Secretary of State Debra Bowen. The ballot may even be delayed until 2016. Facing a tight deadline to gather signatures and build political momentum Draper,founder of Draper Fisher Jurvetson, wants “to make sure there is enough time.”

But experts see little chance of success for Draper’s move.

“Even after a successful referendum, the state legislature and Congress still have to approve it. And that is, well, not going to happen,” as the Washington Post put it.

Though Draper hasn’t revealed how much he would spend to bankroll ‘Six Californias’, he previously shelled out $20 million for a failed 2000 initiative to create a state-funded private-school voucher system.

Los Angeles and Santa Barbara would be part of “West California,” while San Francisco and San Jose would be in “Silicon Valley.”

“California, as it is, is ungovernable,” Draper said in a statement.

“It is more and more difficult for Sacramento (State Capital) to keep up with the social issues from the various regions of California.”

“With six Californias, people will be closer to their state governments and states can get a refresh,” he said.

It isn’t the first time that a split has been proposed. Since its founding in 1850, proposals have come to break California, home to 38 million people, into two states, or three, or four.

And as technology site TechCrunch noted Draper isn’t the only tech zealot seeking separation of sorts.