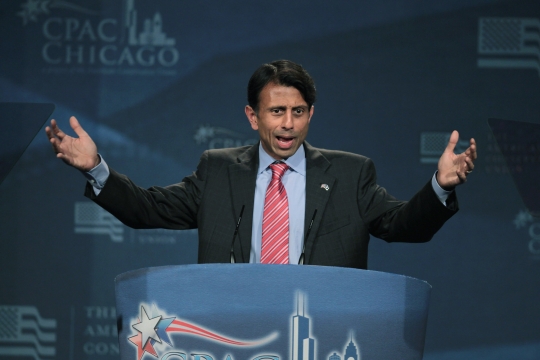 Washington, June 25 (IANS) Louisiana’s Indian-American governor Piyush “Bobby”Jindal launched a historic bid for the US presidency recalling his parents’ journey to the land of “real opportunities” yet seeking to distance himself from his heritage.

His dad, who “grew up in a house without electricity or running water” and “was the only person in his family to get past the 5th grade” and “mom came to Louisiana because they believed in America,” said Jindal Wednesday announcing his bid for Republican nomination.

“And when they got here they found that the legend was true,” said Jindal, 44, who became America’s youngest governor when elected to his first term in 2007, standing before a before a giant American flag at an event centre in the New Orleans suburb of Kenner as supporters waved “Geaux Bobby” ( Go in French) signs.

“And they found that America is indeed the land of the free and home of the brave,” he said painting himself as a doer among a crowd of talkers as he became the first Indian-American and the 13th Republican to join the 2016 White House race.

But even as he talked about his immigrant parents from Punjab “coming to an idea…and that idea is America,” he set himself against immigrants.

“We cannot allow people to immigrate to this country so that they can use our freedoms to undermine our freedoms.”

“That’s exactly what has happened in Europe, where they have 2nd and 3rd generations of immigrants who refuse to embrace the values and culture of the countries they have moved into,” Jindal said. “We must not let that happen here.”

And accusing Democratic frontrunner Hillary Clinton of “already trying to divide us by ethnicity, by gender, and by economic status,” Jindal said: “As for me, I’m sick and tired of people dividing Americans.”

“And I’m done with all this talk about hyphenated Americans. We are not Indian-Americans, Irish-Americans, African-Americans, rich Americans, or poor Americans – we are all Americans,” he said returning to a now familiar campaign theme.

Jindal’s pronouncement came as no surprise to the over three million strong Indian-American community, which gave enthusiastic support to his Congressional and gubernatorial campaigns, but now feels alienated with such talk.

As Pearson Cross, a political science professor at the University of Louisiana at Lafayette who is writing a book on him told the Washington Post: “There’s not much Indian left in Bobby Jindal.”

Once considered a rising star of the Republican party, he has lost support within his own party too which he once chided to stop being the “stupid party.

In his announcement, he also took a swipe at Jeb Bush suggesting that the Republican frontrunner was “saying that we need to hide our conservative ideals. But the truth is, if we go down that road again, we will lose again.”

Jindal’s entry into the race came two days after a Wall Street Journal/NBC News poll found him sharing the bottom of a list of 16 candidates with zero percent of Republican primary voters picking him as their top choice against Jeb Bush’s 22 percent.

So much so that he faces the danger of being eliminated from presidential primary debates starting August six as Fox News and CNN are limiting the first two major debates to the top 10.

Time magazine suggested Jindal faced an “uphill climb to the nomination”, the New York said “his bid appears to be a long shot”, while the Washington Post in an editorial said Jindal had “lost his way” and Republican primary voters seeking a winner would be “more interested in a governor with a stronger record.”