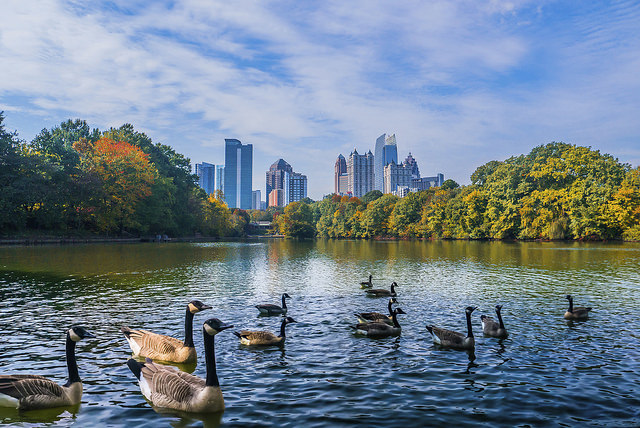 Atlanta, GA: Atlanta, Georgia, the business center of the southeast region of the United States, will be Qatar Airways’ third new route to the US and will commence with daily flights starting on 1st July 2016. The route will be operated with the airline’s flagship Boeing 777 aircraft, according to a press release issued by the airways.

Thomas Marangoly of Montgomery, Alabama, who has been championing this cause since 2009, says the direct flights will be big relief for many in the region. “Now we will be able to connect faster with flights to our own destinations in India via this route (E.g. ATL-Middle East, then to our hometown in India– only two connections). We are really proud of such a great airport nearby,” he says.

“The compelling need to transit through another airport to catch a direct flight to India is a tedious and time consuming process, especially for those with infants and toddlers. To eliminate much of the hardships for travel to India faced by people living in the South-Eastern Region, it is vital to have  a direct flight by any of the Middle East carriers to its hub with onward connections to India.  The daily flights from its hub to cities in India would provide connections for transit passengers to their destinations within three hours,” said Atlanta’s Dr. M.V. George, president of the Indian National Overseas Congress, Kerala Chapter Georgia (INOC) in a forthcoming op-ed in NRI Pulse.

“The fact is that ATL, the international airport for Georgia and neighboring states (Alabama, South & North Carolinas), is only driving distance for people living in parts of the southeast region (Birmingham,Montgomery, Greenville, Chattanooga etc.). Any foreign (or any new airline) starting from ATL will mutually benefit both ATL airport and also boost our economy in the region (with more jobs etc.),” Marangoly adds.

The Atlanta route is one of three additional destinations to be introduced in the USA, the other two cities being Los Angeles and Boston. With these new destinations, Qatar Airways will offer daily nonstop services to all 10 of the largest metropolitan areas of the United States.

Qatar Airways Group Chief Executive, His Excellency Mr. Akbar Al Baker said: “As Qatar Airways continues its global expansion, we are delighted to be offering even more gateways in the United States, connecting passengers from destinations across the Middle East, the Indian subcontinent, Africa and Southeast Asia.

“We look forward to offering a great travel experience to our US passengers on the World’s Best Business Class across our network of more than 140 destinations, with a convenient one-stop transfer at the new state-of-the-art Hamad International Airport in Doha.”

Effective 1st January, 2016, Qatar Airways will commence daily flights to Los Angeles,California, the second largest city in the United States, with the airline’s flagship Boeing 777 aircraft, which features a two-class cabin with 42 Business Class fully lie-flat seats in a 2-2-2 configuration.

From 16th March, 2016, the airline will launch daily flights to Boston, the capital and largest city of Massachusetts, and will operate its latest flagship A350 XWB in a two-class configuration with 36 Business Class seats in a 1-2-1 configuration, featuring an 80” fully flat bed and 17” HD in-flight entertainment screen.

Increasing passenger demand to America’s largest city and financial center,New York, has prompted Qatar Airways to add a second daily service to the city from 1st March 2016. Qatar Airways has served the city daily since the initial route launch in 2007. The second daily service to New York’s JFK will be operated by the Airbus A350 XWB aircraft providing passengers an opportunity to experience both the Boeing B777 and the A350 aircraft types on the route.

Qatar Airways’ on-board experience and service is renowned and provides an unparalleled commitment to service quality, as exemplified by being ranked twice in a row as the best in Business Class, and also by being named World’s Best Airline in 2011 and 2012 at the Skytrax World Airline Awards.

The airline has seen rapid growth in just 18 years of operation to the point where today it is flying a modern fleet of 156 aircraft to 146 key business and leisure destinations. Among the 146 destinations currently served are Dubai, Abu Dhabi, Mumbai,New Delhi,Singapore, Hong Kong,Bangkok, Jakartaand the Maldives– all with excellent connections from the US cities.