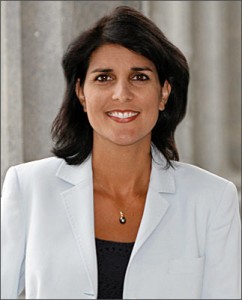 Born Nimrata Nikki Randhawa to Sikh immigrant parents from Amritsar, India, the youngest US governor sought another four year term as she rattled off her accomplishments at a brief, sun-drenched outdoor rally in downtown Greenville, Haley.

“I said when I ran the first time that I don’t want to run again if I don’t think we’re not moving the ball,” Haley was quoted as saying by CNN. “I need to know we’re making a difference, and we’re moving the ball. And we did that. It’s not what we said, it’s what we’ve done.”

About 50 protesters from the South Carolina Democratic Party often booed loudly from a distance as three conservative governors Louisiana’s Jindal, Texas’ Rick Perry and Wisconsin’s Scott Walker, or Haley unleashed a volley of attacks on Obama.

Jindal, for one, devoted a portion of remarks to former Secretary of State Hillary Clinton, another potential 2016 candidate, CNN said. He blasted her handling of the attack in Benghazi, Libya, last year that left four Americans dead.

“Anybody who is focused on anything beyond 2014 is doing a disservice to the party and to the country,” said Wisconsin Governor Scott Walker. “We have to make sure governors like Nikki Haley get elected again.”

Public polling of the race at this early stage is spotty, but operatives on both sides acknowledge Haley has a built-in advantage given the state’s Republican tilt and the governor’s power of incumbency, CNN said.

Democrats, though, are confident that Haley’s Democratic foe, state senator Vincent Sheheen, can unseat Haley in a rematch next November. Haley defeated Sheheen in 2010 by just 4 percentage points.