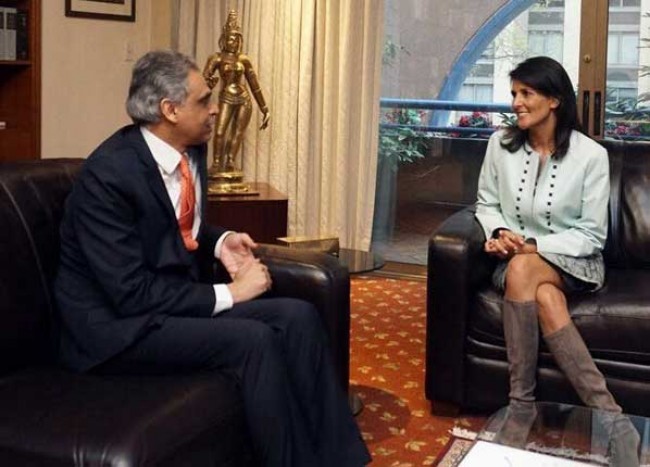 United Nations, April 27 (IANS) The US Ambassador to the UN, Nikki Haley, the first Indian American to hold a cabinet rank, visited India’s UN Mission on Thursday for a wide-ranging discussion with Permanent Representative Syed Akbaruddin.

“We shared perspectives on how India-US can work together at the UN in line with our growing ties,” Akbaruddin told IANS after the meeting.

Haley described their meeting in a tweet as “great”. “We discussed India’s economy, peacekeeping reform and the partnership between India and the US.”

A US Mission statement added that they also discussed “India’s economic and anti-corruption reforms that have helped businesses and spurred growth” and “the close ties between the two countries and opportunities to further the partnership between the US and India at the UN.”

Permanent Representative to the UN has a cabinet rank in the US government and Haley has emerged as a powerful and outspoken voice on foreign policy in the US, even as she deviated from some of the early positions of President Donald Trump.

However, the differences have virtually disappeared as Trump moved closer to her stances due to realpolitik and Congressional pressures. For example, Trump has embraced her hardline on Russia after chemical attacks allegedly carried out by Syria.

A critic of how the UN works, Haley has been insistent on reforming it, especially the peacekeeping operations as a cut in US contributions to the world body looms.

“I know for a fact that Nikki feels very, very strongly about taking on problems that really people steered away from,” Trump said on Monday during a White House lunch for Permanent Representatives of members of the Security Council.

Trump thanked Haley for her “outstanding leadership” and said she was doing a “fantastic job.”

It was not known if the Security Council reforms with a permanent seat for India — a priority for New Delhi — came up during the conversation with Akbaruddin.

President Barack Obama has backed India’s quest, but the Trump administration has not publicly endorsed it and Haley has only said that she was open to the idea.

Asked about it at a meeting of the Council on Foreign Relations here in March, she admitted candidly, “First of all, I’m in learning mode. And as I look at that, I know there is conversations of reform of Security Council.”

She then added: “I’m open to hearing anyone on what they have to say and looking at it and going further.”

With the US contributing 28.36 per cent of the peacekeeping budget, Washington is giving priority to reforming the operations.

Historically India has been the largest troop-contributor to the UN peacekeeping operations and 7,678 are serving now.

India has also been advocating reforming the peacekeeping operations, especially how the mandates are set by the Security Council, often without consulting the troop-contributors.

As Governor of South Carolina, Haley showed interest in India’s economy and its potential and led a trade delegation in 2014 to India seeking investments and stronger commercial ties with her state.