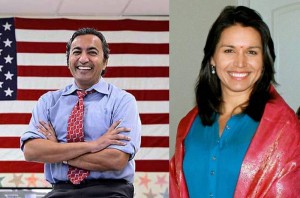 Washington, Oct 25 (IANS) Thanks to the initiative of bipartisan Congressional Caucus on India and Indian-Americans, US lawmakers are set to have their first-ever Diwali reception to celebrate the Indian festival of lights.

An invitation to lawmakers for the reception next Tuesday has gone out from old India friend and Democratic caucus co-chairman Joseph Crowley, according to the gossip blog of Roll Call, an influential publication focusing on Congressional affairs.

“We’re setting a major precedent that will hopefully last for years and decades to come,” he wrote asking fellow lawmakers to share the mysteries of the “festival of lights.”

Crowley praised Tulsi Gabbard, first Hindu American lawmaker and Ami Bera, the lone Indian-American politician in the US House, for helping to plan the event and “stirring up interest amongst our members.”

“I think it is a testament to the growth of the Indian-American community,” Crowley, who has participated in Diwali festivals in the Indo-American enclave of the Jackson Heights section of Queens in New York, told the Roll Call.

“According to spiritual tradition, Diwali is observed as the victory of light over darkness, truth over untruth and righteousness over wrong, and as a time of spiritual renewal,” Gabbard was quoted as saying

“This message has great relevance at a time when politics and partisanship seem to overshadow compassion and concern for the greater good.”

Crowley, according to Roll Call has placed the menu planning in the hands of the Sri Siva Vishnu Temple in Lanham, Maryland, a local house of worship he’s consulted with in the past – “So, we know it will be authentic.”

Urging fellow lawmakers to “consider attending this exciting event,” he tempted them by saying, “Traditional Indian refreshments will be served.”

“This event is an essential opportunity to come together not only to celebrate but to help increase understanding and tolerance amongst all Americans,” he wrote. “It’s going to set a precedent for Congressional Diwali celebrations for decades to come.”