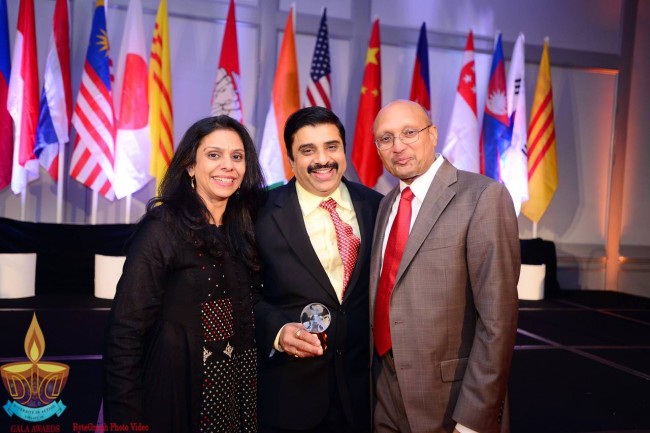 USPAACC Southeast Chapter President Ravi Chander said the awards were a tribute to individuals and organizations that exemplify the chamber’s theme, “Lighting pathways to success”.

“Our Chamber takes great pride in our cultural unity, historic interconnections, racial kinship and appreciation of unity in terms of our values and spiritual character,” he said. “The awards are presented to those who foster similar ideals and manifest them in their decisions and daily activities.”

“THE USPAACC-SE is synonymous with business excellence,” said chairperson, Estrella Cramer. “There are three keys to success for us- supporting incredibly talented people through scholarships, reinforcing businesses to be inclusive of Asian-American vendors and professionals, and have a laser focus on service to others.”

Sravanthi, a young student on an F1 visa and a thyroid cancer survivor, was among the scholarship awardees. Her poignant letter, read out by Dr Seshu Sarma, said the doctors at Northside Hospital in Forsyth had treated Sravanthi at no charge and the hospital had written off her entire hospital bill. Sravanthi’s scholarship was sponsored and presented by Shakuntla Ahuja, who also expressed her heartfelt thanks to her own doctors at Kennestone Hospital who had saved her life.

The three Outstanding Corporate Individuals Awards to John Healy of SunTrust Bank (Chief Procurement Officer of the Year), Estrella Cramer of UPS (Supplier Diversity Advocate of the Year), as well as Memen Varghis of Prudential and Terrez Thompson of The Coca-Cola Company (both receiving The Pioneer Award).

The President’s Lifetime Achievement Award to Gary Kallenbach of UPS and the Regional Advisory Council’s Awards for Enduring Commitment to Diversity to Barbette Hill of Georgia Power and to William Haley of AFLAC.

Sophia Choi of Channel 2 Action News was a competent mistress of ceremonies.