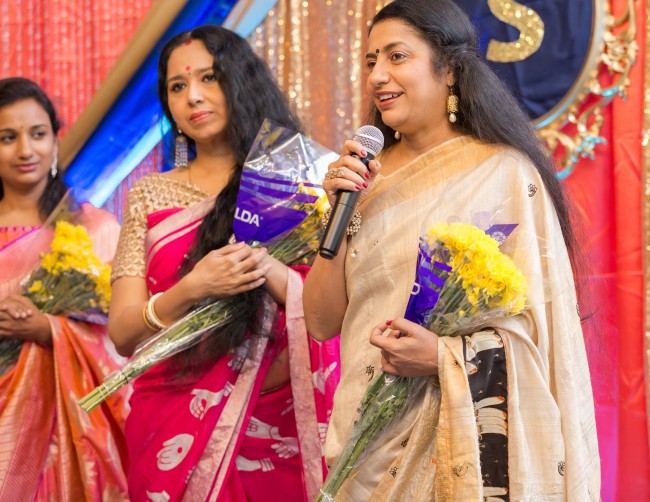 Atlanta, GA, November 8, 2017: Some tales are simply timeless. Surpassing boundaries, the contexts of these tales become pertinent to ancient or modern times. On a quest to explore divinity in women, Patel Brothers Antaram warmed up the cold Atlanta weather at Mountain View High School on October 27 with a whimsical night of storytelling, with the supremely talented Suhasini Maniratnam taking center stage as the narrator. Organized by Idealogy Media Solutions and co-organized by Maitri Community, Inc for Visiting Parents and Seniors, the sold-out show attracted 520 art lovers across Atlanta.

Antaram is an opulent amalgamation of various classical dance forms including Kuchpudi by Yamini Reddy, Monhiniyattam by Gopika Varma, Bharatanatyam by Krithika Subramaniam woven together with persuasive narratives by Suhasini Maniratnam, and accompanied by visual graphics, sand art, tolu-bomalaata and air-suspension acts. The thematic dance theatre production follows the stories of four characters – Rhamba, Vasavi, Kannagi and Andal, depicting divinity of women derived from within.

Antaram is conceived by Gopika Varma, co-produced by Krithika and Suhasini Maniratnam, supervised by Jayendra of Real Image, Kala master’s dance skills, and the music for the first three acts is composed by  S. Arun. The portions of Suhasini have music by maestro A.R. Rahman. 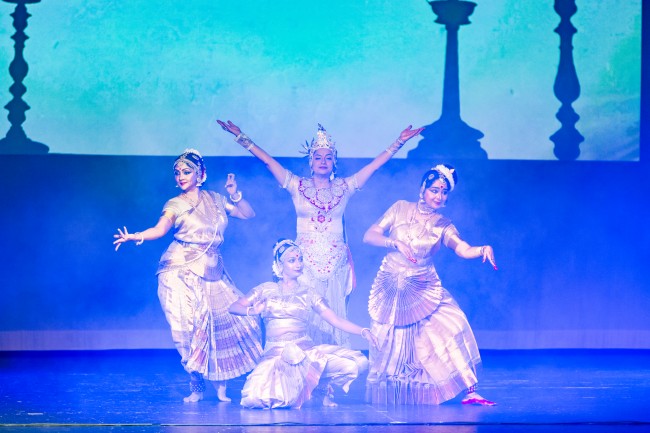 Suhasini kick starts the show as a flight attendant who encounters a young girl Amina from Hyderabad being taken off to Dubai as a child bride for an aged Arab. The airhostess gets the Arab arrested, but Amina is sold off again. “This has to stop,” says Suhasini, as the scene shifts to ancient Penugonda. Relating the current scenario of exploitation of women across ages, Yamini Reddy’s Kuchipudi act encapsulates the story of Vasavi, a young girl from Penugonda, who attracts the attention of the evil king Vishnuvardhan, but resists his advances. Combined with Tolu Bomaalata, Yamini Reddy effortlessly portrays the innocence of Vasavi and the lust of Vishnuvardhan soaring to the climax as she transforms from a mortal to Goddess, burning within the agnigundam.

A housewife in the second act, Suhasini is a grandmother who keeps her IAS officer husband’s life in order. The husband for his part thinks of her as just the housewife who does nothing but stay home. Reflecting upon this reality, Suhanini transports the audience to ancient Tamil Nadu, to narrate the story of Andal — a woman who did everything she wanted, including marrying Lord Vishnu. Kritika Subramaniyam portrays the playful Kodhai, who perceives Lord Vishnu to be her soulmate. Krithika as the joyful young woman in love is gracious and gregarious as she dances her heart away to the Lord himself. Even her earnest father fails to stop her from entering the temple after learning the truth, as Lord Vishnu forbids him from stopping Andal.

Suhasini is Attukal Bhagavathy in act 3, a wronged woman raging fire in the city of Madurai after being widowed because the king unjustly put her husband to death. Gopika Varma as Kannagi carries the legend forward in an evocative Mohiniyattam performance. Kannagi’s metamorphosis from a wife to a despairing widow, to an angry woman who curses the king, tearing her breasts, thrusting upon the city and turning it into ashes even as she swims across the river to Attukul Kerala thereby discovering divinity within herself is riveting.

Suhasini plays the role of Rambha in the final act, a woman who captured the heart of emperor Adil Shah. Scholar-dancer Rambha travels from Sri Lanka to Bijapur only to find herself in love with the emperor. She however refuses to accept status as the twelfth wife of the emperor. When she learns that Adil Shah did not build a place for her in Gol Gumbuz, the hearbroken Rambha leaps to her death from the balcony. Suhasini embraces Rambha in this final act like no other as she literally flies in the air, lost in love, leaving the audience to a breathless climax as she comes crashing down to prove her love. The suspended air act, a true theatrical extravaganza made for a visual treat to be cherished.

“Our goal is to pass on a good message to our next generation living in India and abroad,” said Suhasini in her address to the audience, pointing out that their team has spent a lot of money, effort and time in perfecting the show with the help of several highly talented and experienced professionals from different fields.

Thanking event sponsors, volunteers, and everyone involved in the project, Viju Chiluveru later said, “The most important component of any event is seriously interested and encouraging audience and good volunteers”.

“This event is just the beginning. The best is yet to come” said Praveen Puram as he launched the company’s logo and spoke about Idealogy Media Solutions.

A day before Antaram on Thursday, a ‘Meet and Greet’ was organized for facilitating sponsors, volunteers, and VIP ticket holders to spend time with the guest artists at Chennai Express, Alpharetta. Venkat Chennubhotla, Ram Durvasula, Srivalli Sridhar and Bhanu Vavilakolanu presented several songs mostly from the films acted by Suhasini. The guest artists spoke about their segments while Suhasini gave a sneak preview of the show, and joined the other singers.

In their closing remarks, Viju Chiluveru and Praveen Puram thanked everyone involved in the Antaram project and promised to bring more innovative and unique events to the US in the near future.