Atlanta, GA: Around 100 Sikh Americans from the greater Atlanta area gathered in protest in front of the Indian Consulate to show support for Gurbaksh Singh Khalsa, who is on hunger strike in India for 55 days unto death, in a mission to free incarcerated Sikh political prisoners in India.

Sikhs from all walks of life and ages stood for two hours despite freezing temperature and cold wind to show solidarity with Khalsa and support his movement “#HungerforFreedom”.

Khalsa had called upon the Sikhs from around the world to show solidarity to this cause by protesting against the incarceration of over hundred Sikhs beyond their termed sentences, by submitting petitions to the Indian Prime Minister via their nearest Indian government offices. Khalsa is determined to fight until the prisoners can come home to their families, said a press release issued by the Sikh American community of Georgia. 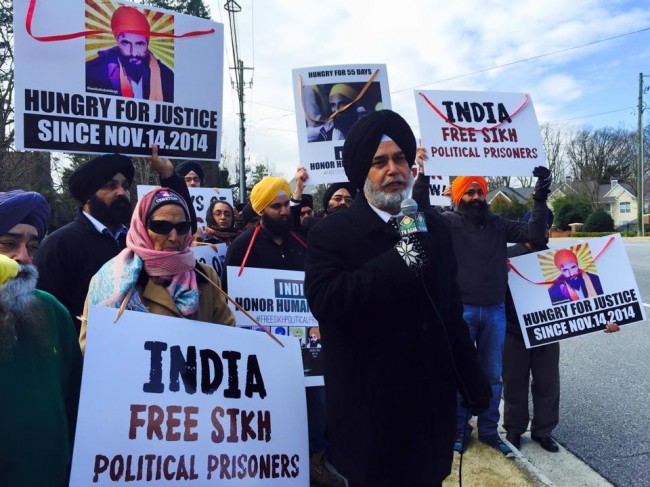 Sikhs worldwide have honored his wish by gathering at their respective Indian offices and submitting demand letters to the Indian officials. Simultaneous protests were also held in front of Indian Embassies or Consulates in London, Frankfurt, New York, Seattle, Houston, Brampton, Surrey, and many other places where Sikhs have made their home. InPunjab, the native place for Sikhs, peaceful protests were held in each and every city, town and village upon Khalsa’s call.

Sikhs from Atlanta demonstrated peacefully and later met the Vice Consul at the Indian Consulate Office and requested him to take their cause to the P.M. of India, via their petition. “The Consul General of India refused to meet with the group and the office did not comment on the situation or further action,” said the release.

A 49-year-old Sikh farmer and civil rights activist, Gurbaksh Singh Khalsa is on a hunger strike unto death, in India from Nov. 14th 2014 with little attention or reaction from the present Government, the press release said. 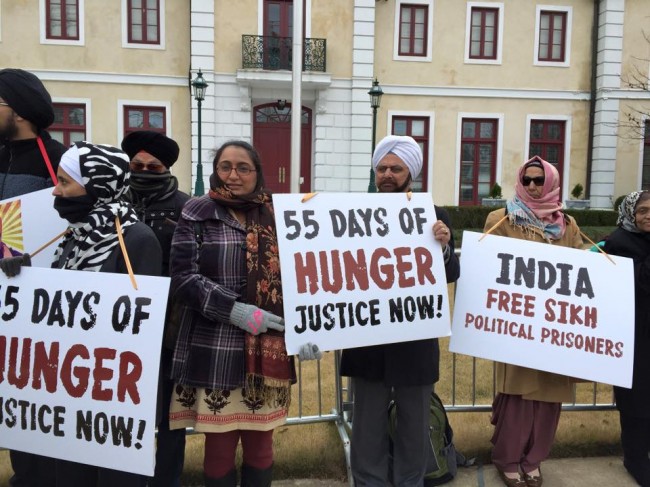 Khalsa has been conducting his nonviolent protest, his hunger strike in Gurudwara Lakhnaur Sahib, Ambala, his native town in the state of Haryana. He is demanding the release of political prisoners who have already served their jail terms – all of the seven prisoners he has focused on (lifers; including one whose capital punishment has finally been commuted to life after 19 years) have served the minimum mandatory of 14 years. “Most of the prisoners are being held without parole for over 20 years and were convicted under the laws that were repealed by the Government itself after pressure from international human rights organizations,” said the release.

This is Khalsa’s second hunger strike. His strike in 2013 received much attention nationally and internationally with Sikh protests across India and the world. He had ended that fast when some of the prisoners were allowed temporary parole and on the assurance that the rest will follow. However, since, there has been little movement on addressing the issue of all the prisoners he has called attention to, in any permanent way. Khalsa is now, thus, fasting unto death – a strike he resumed on the one year anniversary of his 2013 strike. 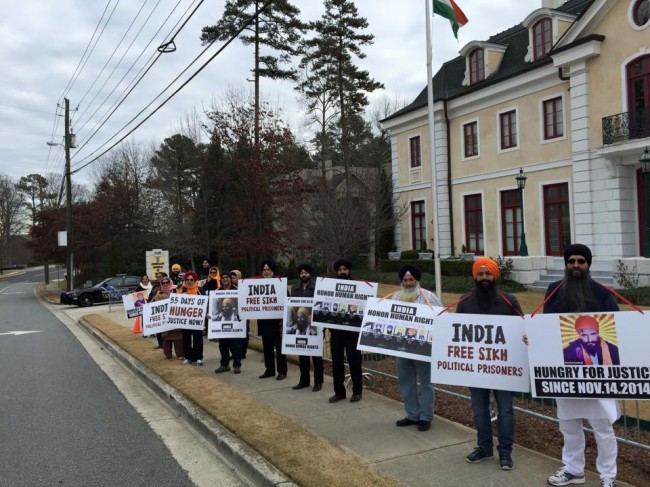 Below is the text from the petitions submitted to the Consul General of India by the representatives of various Sikh communities from around the Greater Atlanta area.

The Hon. Prime Minister of India

The Consulate General of India (Atlanta)

Subject: Request to stand up with the Sikh American community of GA, supporting the release of seven Sikh Political prisoners and save the life of hunger striker Mr. Gurbaksh Singh Khalsa in his 8th week of starvation.

As concerned Sikh Americans and overseas Citizens of India, we petition you to stand by the cause of human dignity, justice and liberty, the values thatIndiaholds in the highest regard.

A fellow Sikh in India, Mr. Gurbaksh Singh Khalsa, a Human Rights activist, has been on hunger strike from Nov. 14th 2014, and has entered the 8th weeks of his starvation by the date of this letter. He is demanding the release of seven Sikh political prisoners who are being arbitrarily detained and deprived of their liberty by the previous Government of India for 19-25 years.

These Political Prisoners are – Gurmeet Singh; Lakhwinder Singh; Shamsher Singh; Lal Singh; Wariam Singh; Gurdeep Singh Khaira and Devinder Pal Singh Bhullar. All these prisoners have well over served the minimum sentences meted out to them many years ago.

InIndia, life term convicts are generally granted release after serving 14 years in prison but these Sikh political prisoners have served 19 to 25 years in prison and are not being released due to political red tape in different State Governments, some despite recommendations from their Parole Boards of early release.

“It is clearly impossible to invoke any legal basis justifying the deprivation of liberty (as when a person is kept in detention after the completion of his sentence or despite an amnesty law applicable to him).”

The actions of the Government related to the continuous arbitrary detention of Sikh Prisoners of Conscience violate every norm of democracy, Universal Declaration of Human Rights and International laws.

As a global citizen and the Ambassador of India, you are requested to honor your commitment to the Universal Declaration of Human Rights adopted by the UN General Assembly. The first line of this document states: “Whereas recognition of the inherent dignity and of the equal and inalienable rights of all members of the human family is the foundation of freedom, justice and peace in the world.”

We ask you to take up this issue with the Prime Minister of India’s office for immediate action.

We hope that you will join our cause to voice the plight of the uncountable number of illegally detained Sikhs inIndiaand help secure the release of the first seven immediately thereby saving the life of Mr. Gurbaksh Singh Khalsa.

Time is of essence. With each passing minute, Mr. Khalsa is pacing closer to death. Please act immediately.

Please feel free to contact us for any questions.

The Sikh-American Community of Georgia