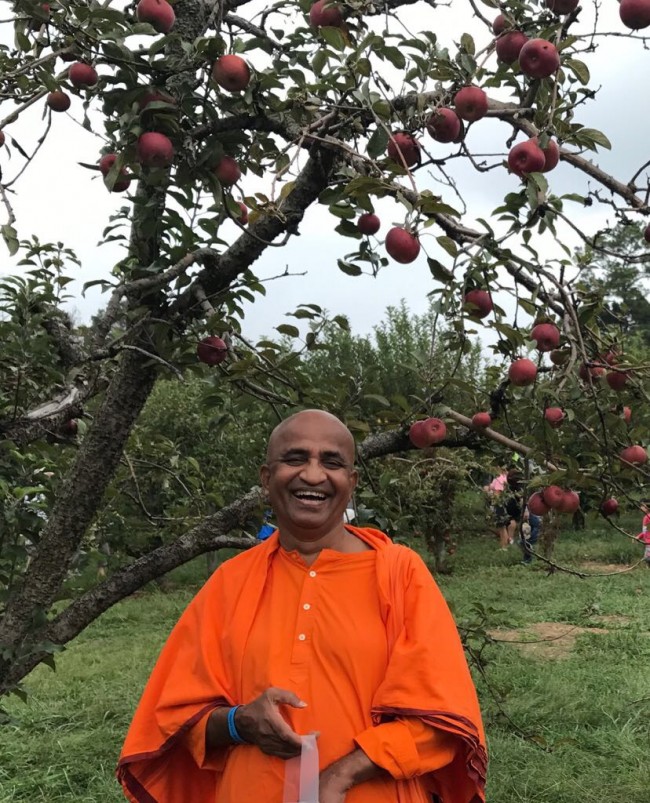 Atlanta, GA, November 9, 2017: “Deepavali signifies that we must be fortified with light always. Light or knowledge is the greatest protector of man,” says Swami Nirbhayananda Saraswati, President of Ramakrishna-Vivekananda Ashrama, Gadag and Bijapur. Swamiji was visiting Atlanta this Deepavali as part of his US visit across the US including California, Washington, Oregon, Texas, North Carolina, Virginia and New Jersey. Swamiji has represented India and Hinduism at the 4th World Parliament of Religions held in Barcelona, Spain, 2004.

“As a follower of Sri Vivekananda, I want to spread the message of Vedanta all over the world and in the process seek help for my work in India. I run four ashrams and one school for the poor and destitute back in my motherland. Although my disciples in all these centers for conducting Youth Conventions, Teachers’ Conferences and Mata Sammelanas ably assist me, financial stability is yet to be achieved and my trips to the US help me a little in this direction” says Swamiji about the purpose of his visits to US and abroad.

Swamiji’s school houses 500 students and about 100 who reside in hostel. The school provides education from grades one through ten. Hostilities mostly come from educationally and economically backward sections and many of them are first time school goers. Their research wing, RRAITACE – Ramakrishna Research Academy for the implementation of total and comprehensive education simplifies teaching and students are put into original thinking as a result of which a 6th grade student can solve 8th grade Mathematics and invent problems for exercises. Yoga, Veda chanting, Computer classes, Bhajans constitute routine. “On an average out of every 40 students that appear at a board exam, 30 students pass with first class results and the rest second class. “ he proudly states.

Speaking of memorable moments at school that serve as life lessons to all, Swamiji recalls the predicament of an eight-year-old girl who lost her 5 Rupees. Afraid that her parents may be upset she had been crying. When a sympathetic passerby offered her the money she refused saying her teachers taught her not steal or accept gifts unless it is inevitable. She would rather tell her parents the truth and bear their wrath but did want to commit another mistake of violating what her teachers have instructed. “The passerby happened to be my friend and I was filled with joy when he told me about this,” smiles Swamiji.

Swamiji spoke about “Educative Initiatives of India” and participated in a panel discussion with religious representatives and delegates from different countries at the World Parliament. He has delivered lectures in Universities of France & Italy pertaining to the Philosophy of Vedanta. Swamiji accepted invitation from the Government of Italy for inaugurating its National Cultural Festival – “TURIN SPIRITUALITY” in the city of Turin, Italy. Swamiji undertook a Spiritual tour to Italy, Switzerland and France where he spoke about “Indian Religion & World Peace”, “Vedanta & Human Upliftment” among others.

“Liberation of 16000 maidens excruciated by Narakasura when they appealed to Krishna wholeheartedly is a reflection of wisdom that by taking refuge to the Lord unconditionally, one gets liberated with the light of Lords’ grace and assurance,” concludes Swamiji. Those interested may contact Swamiji at swaminirbhayananda@gmail.com.