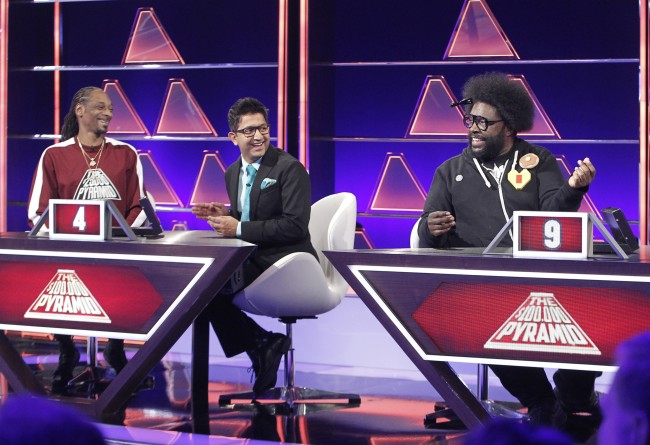 “Certainly not bad for a day’s worth of work,” as he put it. Seshadri, a former CNN journalist and WION news anchor, is one of very few contestants of Asian origin to have appeared on the show.

With celebrities Questlove and Snoop Dogg on his episode, Seshadri found himself tuned into Questlove, acing the first category with right answers for all seven clues. They only missed “gag,” answer to “Things you do with your throat” the second time. With categories Directions, Chinese food, What a neighbor would say, Designers, Quiet things and Things that are sweet in the winners circle, the duo went on get it all right in 40 seconds, with 20 seconds to spare. Not winning the toss was actually advantageous thinks Seshadri since it gave him time to study the pyramid board and choose categories to pick.

“I don’t listen to hip-hop at all,” Seshadri told NRI Pulse. He worried if the hip hop themed show would work against him. But he managed to work around it, asking Snoop Dogg to avoid giving names/hard songs/albums but focus on simple clues and opposites. His game show skills shined through, as he managed to give all his clues without a single hip hop reference, working with a laid-back Snoop Dogg. For words from famous hip-hop groups, for instance, for “salt,” he said “Not pepper but…” For “run,” he said, “Not walk but…” as clues for groups Salt-n-Pepa, and Run DMC.

Seshadri stumbled in the “Hip Hop artists with 10 million or more followers” category when Snoop Dogg had to give him clues for singer Pink. All Snoop Dogg could come up with is “color,” adding “white girl.” So Seshadri listed as many colors as he could think of, before screaming “Beyonce,”. This turned to be the answer to a previous clue “Jay-Z’s wife” but he got credit for it anyway.

“The category with the names are the hardest because you either know it or you don’t,” observed Seshadri. “I practiced by studying old episodes of the Dick Clark version, the Donny Osmond version, making up questions using post it notes, buying the old board game, creating lists and playing with my mom and brother.” He said. “I also was on a game show when I was 10 with my dad in Australia — on the Nine Network called My Generation. We won that too.”

Be loud, be bold but be you! Have fun stories to share about your life and experience. Be fast, be efficient. Stay up to date on current events and pop culture. Be competitive but have fun, is Seshadri’s advice to aspiring contestants.

Seshadri said the Winner’s Circle had to re-taped due to technical malfunction of the board. Would he return home with the top prize had it not? We will never know. For now, Seshadri is happy with where he got despite the limitations.

“I’ve always wanted to be on a game show and I am so glad I was able to do this! My next goal is to not be a contestant but to be a game show host! Watch out Michael Strahan!” signed off Seshadri.