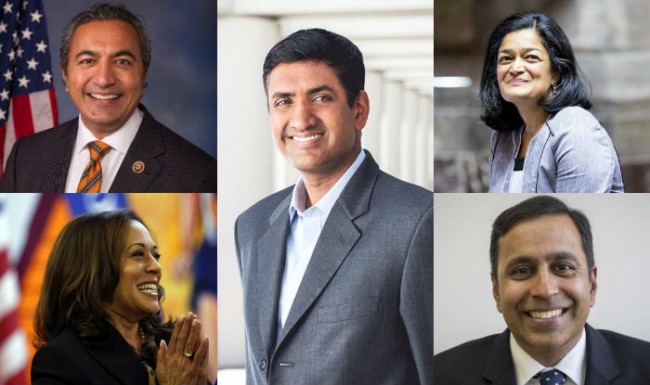 New York, Nov 9 (IANS) Indian Americans made a mark in Congressional politics with one of them becoming the first to be elected to the Senate and four others winning seats in the House of Representatives.

Kamala Harris was elected from California to the Senate defeating fellow-Democrat Loretta Sanchez.

Pramila Jayapal from Washington, Raja Krishnamoorthi from Illinois and Ro Khanna from California will join Ami Bera, who was re-elected from California, in the House of Representatives.

Tulsi Gabbard, who is a Hindu although not of Indian descent, was re-elected to the House from Hawaii.

All Democrats, they range in age from 35 years to 52 years and represent the emerging class of leaders.

“This also help the US and India to come closer as a global partner in trade, investment, education, science and technology, military cooperation and fighting terrorism.”

The victory of Harris is significant because senators are elected by the entire electorate in their states and California is the most populous state in the nation with 18 million voters.

The 52-year-old Harris, who traces her family roots to Chennai, is a lawyer by profession and was twice elected Attorney General in 2010 and 2014.

Bera, a 51-year-old doctor, had come under a cloud after his 83-year-old father, Babulal Bera, was found guilty of illegally funding his son’s election campaign and sentenced to a year in prison. Prosecutors, however, cleared Ami Bera of involvement in his father’s crime and he beat the odds to defeat his Republican rival Scott Jones.

A financial analyst by profession, Jayapal, 51, defeated fellow Democrat, Brady Wilkinshaw. A civil rights activist involved in immigrant and women’s rights causes, she was born in India. She received the endorsement of Bernie Sanders, the insurgent socialist who ran against Hillary Clinton in the party primary.

Krishnamoorthi, 43, who had advised President Barack Obama on economic issues when he was a Senator, received a personal endorsement and a promotional video from Obama. He defeated Republican Peter DiCianni in a constituency that comprises Chicago suburbs.

Born in India, he is a technology entrepreneur heading two companies and has also served as Illinois state DeputyTreasurer and an Assistant Attorney General on special assignment to fight corruption.

Khanna, a former federal Deputy Assistant Commerce Secretary, won from the heart of Silicon Valley on his second try. With the endorsement of former President Jimmy Carter, he defeated sitting Congressman Mike Honda in a bitter rematch.

Harris has a dual identity: She is also counted as an African American as her father is a Jamaican of African descent and she follows the Baptist faith.

She would also become the second American woman of African descent elected to the Senate and joins two other African Americans in the Senate.

After her parents divorced, Harris was raised by her mother Shyamala Gopalan, a cancer specialist from Chennai, giving her equal claim to Indian heritage.

The first Indian elected to Congress is Dalip Singh Saund, who won from California in 1956.