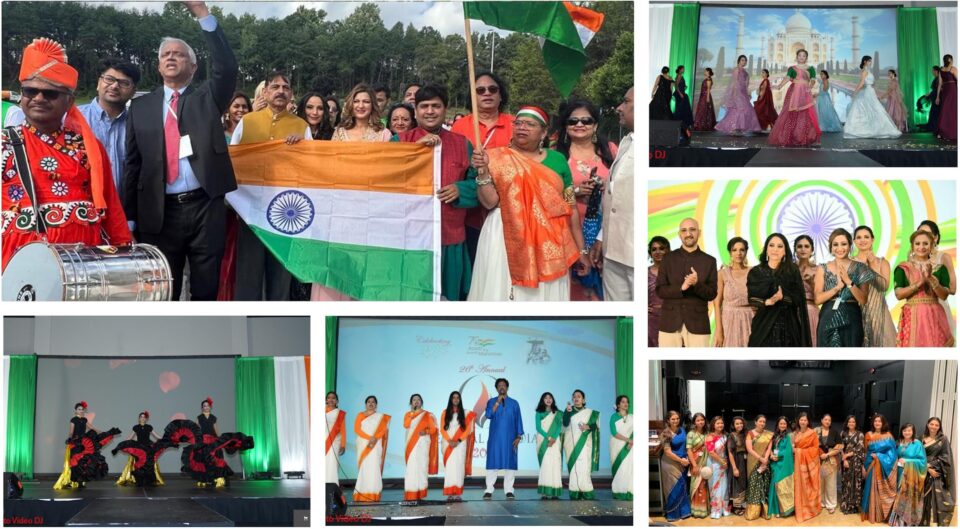 Atlanta, GA, August 26, 2022: The commemoration of 75 years of Indian Independence was a momentous occasion and over 5000 attendees gathered at the 26th Annual Festival of India held at Gas South Center on August 13, 2022. Attendees enjoyed the panoply of bazaar, fanfare, performances, pageantry, seminars, competitions, and over 60 varied vendors including food stalls.

IACA had kicked off the Azadi Ka Amrit Mahotsav festivities earlier in the year with celebrations of Parakram Diwas, to commemorate the birth anniversary of Netaji Subash Chandra Bose, and the 150th birth anniversary celebration of Sri Rabindranath Tagore in collaboration with the Indian Consulate in Atlanta.

Led by Akkineni, IACA kicked off festivities with patriotic fervor with the Flag March marshaling a group of representatives from diverse community organizations across Atlanta who were invited to join in carrying the Indian flag across the Hudgens Art Center parking lot, resonating the pride and joy every Indian carries within, beyond borders.

“FOI Flag march is one of the longest Indian flag marches with more than 500 patriots walking with a 300 feet long flag. It was an amazing experience to lead the flag march and a lot of planning and coordination required to have a smooth walk. I would like to thank and congratulate all the volunteers who participated in the flag march,” Sudhir Aggarwal, President APAC, who was among those who led the flag march noted.

“Took a little bit of home to Atlanta…”, actress Sonali Bendre who headed the march posted on her social media.

The office of Governor Brian Kemp sent video wishes to the event. Jon Ossoff U.S. Senator, GA was unable to attend but State Director for the Office of Sen. Ossoff, Chandra Harris spoke on his behalf.

Dignitaries commended the contributions of the Indian community to Atlanta and the world in their congratulatory wishes for Indian Independence.

“I am really happy that IACA has felicitated me on this occasion,” Dr. Kulkarni said about her recognition. Dr. Kulkarni is due to leave Atlanta soon with many accomplishments under her belt. AG Carr also lauded her efforts having worked with her as the commissioner of Economic Development of Georgia. Akkineni also highlighted her efforts to bring together communities with a unified Diwali Mela.

In her address Dr. Kulkarni underlined the significance of Azadi Ka Amrit Mahotsav and applauded IACA in its efforts towards celebrating events leading up to the day.

“It has been an honor to serve as your Attorney general in the past six years. All Georgians deserve to be safe,” AG Carr said, along with his wishes for the occasion. He also thanked Neera and Vijay Bahl for the invitation. AG Carr was the guest of honor for FOI 2021 as well.

Bedecked in pink and gold, Bendre shared her inspirational journey with emcees Archith Seshadri and Aarti Pandya in a candid tête-à-tête on stage. She also led the flag march earlier and released the FOI 22 Souvenir.

“Festival of India is a flagship event not only for IACA but also for the entire Indian American community in the Atlanta area. Going on for 26 years now, its the single most unifying annual event for the burgeoning community and it was a privilege to be able to lead it this year,” Rina Gupta, BOD, IACA remarked.

“The Fashion Show and performances were excellent. The turnout was great and so is the newly renovated Gas South Center,” Mustafa Ajmeri, CEO, Global Entertainment and Media remarked.

Highlights of the event included a Health Fair led by leading Atlanta Indian American Physicians, Dr. Inderpaul Singh and Dr. Uma Jonnalgadda and many other eminent physicians of Indian origin.

“Indian people are at high risk of diabetes, but research specifically in this population is limited. The forum discussed the urgent need for such research and about investments for it,” noted Dr. Venkat Narayan, Executive Director, Emory Global Diabetes Research Center who led the highly informative session along with his Emory colleagues, moderated by Dr. Gulshan Harjee.

August 15, 2022 also marked the one-hundred-and-fiftieth birth anniversary of Sri Aurobindo. “We at the IACA’s FOI celebrated the occasion by hosting a talk about Sri Aurobindo, one of the most renowned of the mystics of the last century, with focus on his phenomenal and often—unacknowledged contributions to the Indian freedom struggle movement,” Dr. Kundan Singh, professor at Sofia University, Palo Alto, CA and at the Hindu University of America, Orlando, FL noted. Professors of UGA and University of West Georgia participated int eh Q&A that followed.

“We were able to hold an authentic and deeply caring conversation about what ‘a successful life’ means for Indians and Indian Americans across all different generations—from ages 16 to 75. In doing so, we addressed the model minority myth, gender expectations, and the importance balancing career aspirations with mental health needs. The panelists and audience seemed to leave the conversation with a deeper appreciation of a complex, holistic definition success—not just in terms of economic and career success, but spiritual, psychological, and relational success as well, ‘ Dr. Nisha Gupta,  Associate Professor of Psychology University of West Georgia, who led the Defining Success Seminar with panelists.

“This year national level senior care nonprofit, AARP partnered with IACA for the Senior Azadi mela!, ably co-partnered by Seva Adult care and Bankers life,” Prajakta Dengwekar, who led the mela said. Senior care experts from all these organizations shared important information regarding retirement, ageing and various choices seniors have to age gracefully. “With footfalls of over 120 people, this senior mela had great start this year!,” she added.

Several competitions including dance, drawing, chess, and public speaking kept the youngsters and adults occupied. Winners of each of the competitions were recognized at the event. IACA also awarded the annual scholarships to 15 deserving students. Over 60 booths and food vendors kept shoppers and hungry palettes busy!

Stumbling to overcome obstacles since independence to gradually making its way with rapid strides in every sphere of development, India, the world’s largest democracy has emerged as a global power on the world stage today. Over the past seven decades, India has siphoned her civilizational strengths and cultural diversity to a brand pristine shared future, with opportunities for achievement, progress, and prosperity for its billion-plus citizens, making the country an inspiration. As India ushers in its vision for the next 25 years, it is natural to be inspired by the milestones the country has marked in the past as we celebrate the steady progress she continues to make on so many fronts.