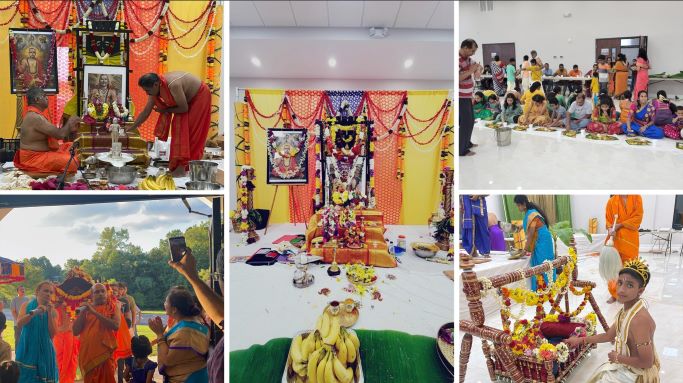 Atlanta, GA, August 26, 2022: The Ananthaadi Raayara Matha of Atlanta (RAMA) celebrated the 351st Aaradhane of Shri Raghavendra Swamy with much élan at Gadpurdham Swaminarayan temple on August 13 & 14, 2022. Well over 350 people joined the festivities.

Shri Raghavendra Swami is a 16th century saint, and Guru, who advocated Vaishnavism and popularized the Dvaita philosophy of Madhvacharya. Each year, the day he entered Jeeva Samadhi (Brindavana) at Mantralayam and believed to live in a metaphysical form for 700 years, is observed as the Raghavendra Aaradhane. Aaradhane is celebrated on the second day during the Shukla Paksha in the month of Shravana, as per the south Indian calendar. Generally, it is three-day celebration, the first day known as Purva Aaradhane, the second day, Madhya Aaradhane and the third, Uttara Aaradhane.

The cultural events included several devotional song and dance performances including a show by young kids. A traditional Pallakki or palanquin procession was brought into the place of worship while a beautifully decorated Unjal (swing) awaited the Lord. Concluding with evening Aarti, the Aaradhane, which means expression of devotion, was amply displayed at the celebrations.

“By the blessings of Sri Hari Vayu and Guru Rayaru, we had an opportunity to celebrate Rayara Aaradhane in person after 2 years. We were not able to celebrate in public due to COVID-19. We got a very good place for both Saturday and Sunday to celebrate aaradhane. This made lot of tractions in the Rayara devotees and with their selfless seva and hard work , both days celebrations went very successfully. Thanks to all the devotees for making this memorable. We are aiming for big leap in establishing Rayara matha in Atlanta very soon,” Pradeep Vittalmurthy, Founder, RAMA, said.

Shri Rāghavēndra was a Hindu scholar, theologian and saint. His diverse oeuvre includes commentaries on the works of Madhwa, Jayatirtha, Vyasatirtha, interpretation of Upanishads from the Dvaitaand standpoint a treatise on Purva Mimamsa. An accomplished Veena player, he has composed several songs under pen name Venu Gopala. He served as the pontiff of Madhwacharya Mutt at Kumbakonam from 1624-1871. His Brindavana in Mantralayam, Andhra Pradesh attracts thousands each year.

Devotees enjoyed the festivities with an elaborate traditional food spread. For details about the Matha you can check https://atlantarayaramath.org/.

What to look out for in these much-awaited streaming shows, starting Aug 25