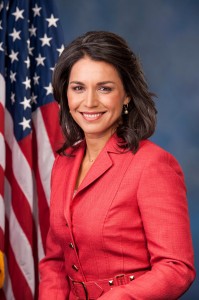 Atlanta, GA: The US Hindu Alliance will celebrate the 150th birth anniversary of Swami Vivekananda on October 27, 2013 at the Sumant Cultural Center, located inside the Shree Shakti Mandir Complex, one of the largest Hindu temples in the United States. The Chief Guest will be Honorable Tulsi Gabbard, first Hindu member of Congress and Vice Chair of the Democratic National Committee. Many other prominent dignitaries are slated to be present at one of the biggest events of the year in Atlanta.

Swami Vivekananda’s electrifying speech at the World Parliament of Religions in 1893, heralded a new era for Hindus, India and the world. His empowering words inspired the freedom movements of India and Indonesia, challenged fanaticism and religious intolerance around the world, and gave birth to a new age in which Yoga, Meditation and the Eastern way of life found hundreds of millions of admirers and practitioners.

The USHA event will include a cultural program showcasing Indian classical dances, speeches by invited guests and the key note address by Congresswoman Tulsi Gabbard. For more information, please visit the USHA website at www.ushaonline.org. The event is being organized with the support of scores of Hindu Temples and community organizations from all over Georgia.

Since a large crowd is expected, organizers are requesting everyone to reach the venue by 4.30 p.m. Formal attire is required (Indian or Western). Admission is open to those who are 17 or older. Come celebrate Hindu Empowerment.

The United States Hindu Alliance (USHA) is a national, non profit organization of American Hindus to protect and promote the interests of Hindus worldwide. For more information, please visit www.ushaonline.org.