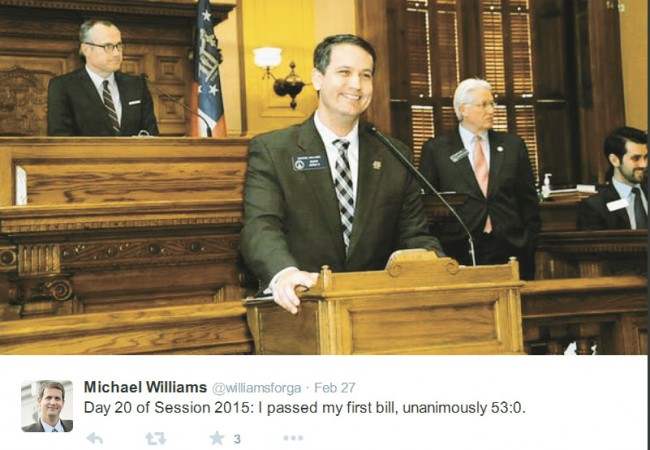 Atlanta, GA: As State Senator Michael Williams (R-27) prepared to answer this reporter’s questions; he had one of his own. “How can I reach out to the Indian community?” he asked.

As part of his efforts to pool together different communities in his district “to talk and share our commonalities,” Sen. Williams visited the Shirdi Sai Temple of Atlanta in Suwanee on January 1, where he met several ecclesiastical leaders. “I learned that the temple is doing a lot of humanitarian service withinForsythCounty. I’d like to spread the word. I want to be as welcoming and inclusive as I can,” he said.

“The media focuses too much on our differences. I believe wholeheartedly that we can find more things that we agree on than we don’t agree on. Let’s work on the things we agree on,” he added.

A political newcomer, Sen. Williams represents District 27, which includes the northern part of Forsyth, the wealthiest county in Georgia. A CPA by trade and a small business owner, Sen. Williams decided to take the political plunge after selling all 18 of his Sport Clips franchises in 2013. His wife Virginia supported his decision. “We don’t like politics. We don’t like how things are done. We are going to do it the way we think it ought to be done, so that I can go to bed at night thinking I did right by the people I represent- even if it costs me an election,” he said. “My goal is not to remain in office as long as I can, but to be as effective as I can.”

Sen. Williams believes in reducing the size and scope of government, improving the state’s economy and ensuring our local communities control our children’s education.

He is excited about the legislation passed unanimously by the Georgia Senate in the first week of February that would allow high school students who have completed the requirements for a community college or technical college degree to earn both high school and associate degrees. The bill, backed by Lt. Gov. Casey Cagle, would help reduce the number of high school dropouts in Georgia, improve the state’s high school graduation rate and help meet Georgia’s workforce needs faster.

To qualify for the dual enrollment program, students need to be at least 16 years old, have completed the state’s requirements for the ninth and 10th grades, and the work required for an associate degree, technical college diploma or at least two technical college certificate of credit and industry occupational certification or license programs.

“Students who excel can skip a few years of college and go straight to their major. On the other hand, those who are struggling (with schoolwork) can get certification for hands-on type of jobs like welding or plumbing or construction,” he said.

Williams, who is on the Senate Higher Education Committee, also talked about SB 44, a bill that would allow certain immigrants without legal status eligible for in-state tuition in Georgia. Senate Bill 44 applies to immigrants accepted into the Deferred Action for Childhood Arrivals program, or DACA.

On the big push in Forsyth to go back to voting county wise, Sen. Williams had this to say: “Having a county-wide voting system in place made sense for Forsyth County in 1960, when there was no diversity in the population. Had HB 378 never been passed, we may still have a county wide voting model. However, under the circumstances we are in today, any attempt to return Forsyth County to county wide voting would result in a lawsuit. For this reason I cannot, in good conscious, put forth legislation that will inevitably cost the tax payers millions of dollars.

Section 2 of this Act focuses on something called “Vote Dilution”. Vote Dilution refers to election methods that dilute the voting strength of racial minority voters in the larger voting population.  Under the law, a violation occurs when the plaintiffs prove that the electoral structure operates to minimize or cancel out minority voters’ ability to elect their preferred candidates. Even if I was successful in changing the model to county wide voting through legislation, our county is 83 percent Caucasian and the vast majority of the remaining 17 percent live in the southern part of the county, making a violation of Section 2 easy to prove.

Nevertheless, I cannot sit back and do nothing. Of the almost 500 people who attended the fall town hall meetings, nearly everyone expressed how unhappy they are with the current model for electing our board of commissioners. Our county delegation has met several times to discuss this issue and are striving to arrive at a solution that would address most of the underlying issues people have with the current model.”

And, while admitting that the Forsyth County Board is 100 per cent Caucasian, Sen. Williams hopes to see more diversity in local politics soon. In the meanwhile, his focus is on getting all his constituents involved and assuring them that their voice matters.