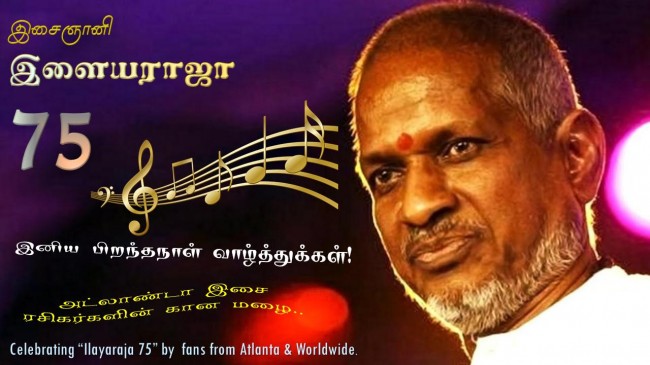 Atlanta, GA, July 30, 2018: The concept struck Atlanta fans of musical maestro Ilaiyaraaja on his 75th birthday (June 2nd, 2018)-  to dedicate an isai maalai (musical garland) with 75 of his songs flowering from the hearts of the fans, and compiled in 24 hours.

“We had 60 enthusiastic contributors of all ages and both genders who delivered 90% of the songs within the span of 30 minutes to 12 hours,” the enthusiastic organizers said, through a press release.

“The most interesting aspect of the whole project is the intentional spontaneity of the fans rendering the song flashes (30-50 seconds) Pallavi or saranam dear to their hearts with no preplanned effort from the coordination team. Though a majority of the singers were from the Atlanta area, quite a few of our fan friends joined from other states in USA and some from other countries including India and Australia.”

Atlanta fans of Isaignani Ilaiyaraaja, along with his worldwide fans, presented the video dedication featuring 75 unique musical glimpses to commemorate the 75th birthday of the Maestro, released by the youngest fan, Praneetha Krish.

This is a virtual effort with fans collaborating using Google drive, facebook and whatsapp.

Full dedication of 75 songs and we had a viewership of over 3000 hits at this time.