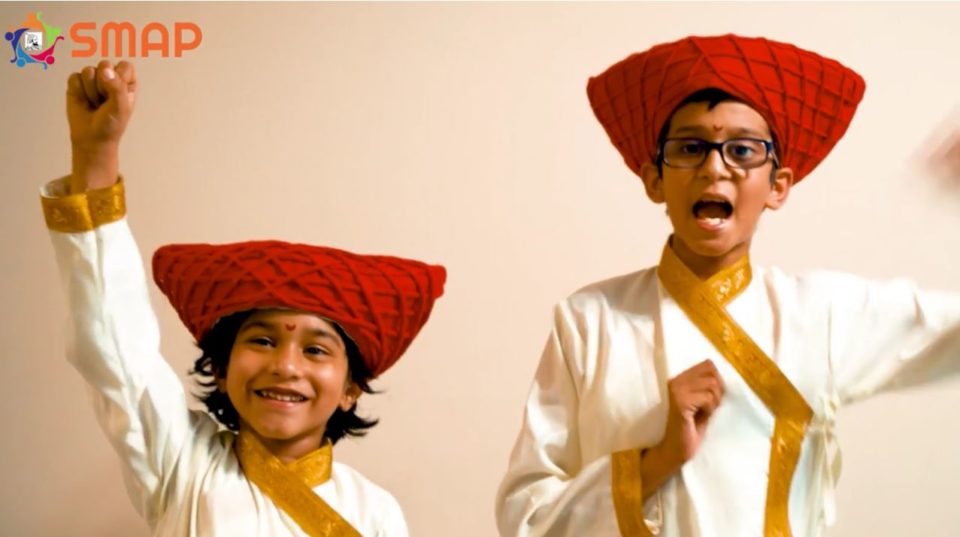 The event began with the traditional Abhishek of Chhatrapati Shivaji Maharaj statue performed by Anika and Eshan Patil from Los Angeles, followed by the reverberating Shivgarjana by young singers of Atlanta, Om Khandke and Aarush Gandhi. “It was mesmerizing to see the respect offered by Indian-American children from elementary and middle schools. Through these kinds of celebrations, SMAP is promoting Indian heritage in American society,” said Monalisa Khandake, President of SMAP’s Atlanta chapter.

An audio-visual presentation was rolled out to honor Indian national heroes, Prithviraj Chauhan, Maharana Pratap Singh, Raja Krishnadevaraya, Chhatrapati Shivaji Maharaj, Maharaja Ranjit Singh, Rani Laxmibai and many others on this occasion. “We have a duty to bring out these heroes from the pages of Indian history books and rekindle their messages” said Sujatha Padmanabham, event moderator. She invited Vijay Patil, Founder of Shivaji Maharaj America Parivaar (SMAP Foundation Inc.) to describe the vision and mission of the organization.

“We are still inspired by the three words, ‘Chhatrapati Shivaji Maharaj!’ and they create energy in us when we say them loud and proud,” said Patil. He described the significance of the coronation ceremony as Victory of People’s kingdom, success of a merit-based society where there was liberty, equality and justice for all. The mission of the organization, Patil elaborated, was to spread “Unity and Leadership lessons learned from the Legendary Life of Shri Chhatrapati Shivaji Maharaj that can be applied in today’s world.”

Building a global network of leaders, promoting initiatives that unite people, helping others who are less fortunate to bring equality and establishing a Leadership Center across the world, Patil said were the key objectives of the organization.  He then introduced the team of SMAP leaders from various parts of the world, USA, France, Canada, UK, Kenya, Malaysia, China and a dozen other countries.

Nitesh Patel, Mayor Pro Tem from City of La Palma, California introduced the keynote speaker of the evening, Francois Gautier, world-famous author, journalist, speaker and community activist. Born and raised in Paris, France, Gautier grew up studying the history of world-famous leader Napoleon Bonaparte but later when he visited India, he studied the life of Chhatrapati Shivaji Maharaj and became his ardent fan. He then decided to dedicate his life to building Chhatrapati Shivaji Maharaj Museum in Pune.

Gautier said he was always puzzled about the reason for Chhatrapati Shivaji Maharaj not being well-known internationally in comparison to other European leaders. He noted that it is time for Indians to elevate his stature to the international stage. He recalled from his childhood that Napoleon’s history was included in all the textbooks that he grew up with. There were dozens of new books, movies, stories that get created each year in France and other western countries. Napoleon had tried to unite the entire Europe, but his vision, Gautier observed, seemed to be realizing only after a couple centuries. “Today, we see that the entire Europe is trying to unite through Euro-Zone, One Currency and other initiatives.”

Describing Chhatrapati Shivaji Maharaj as a “Yogi Warrior” with a tremendous sense of intuition who could foresee the future, Gautier noted that the renowned leader also united the local people to preserve the culture and stop atrocities caused by the invaders. Gautier shared his observation that there are plenty of statues in India, but people need to understand and spread the true values that Chhatrapati Shivaji Maharaj and other leaders represented in the society.

Vijay Patil re-emphasized the need of spreading Indian heritage internationally and reiterated SMAP’s goal of making Indian National Heroes well-known global icons. He concluded the event by thanking the audience and the rest of the event organizers.