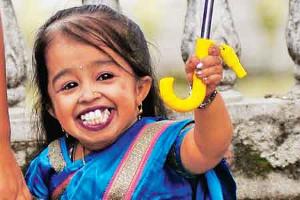 Washington, Aug 14 (IANS) All of two feet, Jyoti Amge, the world’s smallest woman, has joined the cast of US TV show “American Horror Story”.
She will star alongside actress Jessica Lange in the fourth series of the show, Sky News reported.
The news emerged out of an announcement by the show’s creator Ryan Murphy on Twitter.
Murphy tweeted a photo showing Lange posing with the 20-year-old Amge.
“Jessica and our newest cast member Jyoti Amge … the world’s smallest woman,” Murphy posted.
Amge is considered the world’s smallest woman by both the Guinness and Limca books of records. Her restricted height is due to a growth anomaly called achondroplasia.
This is not the little wonder’s first brush with the entertainment business. In 2009, she had starred in the documentary “Body Shock: Two Foot High Teen”.
The next season of “American Horror Story” is set in a traditional circus town of Jupiter, Florida, in 1950.