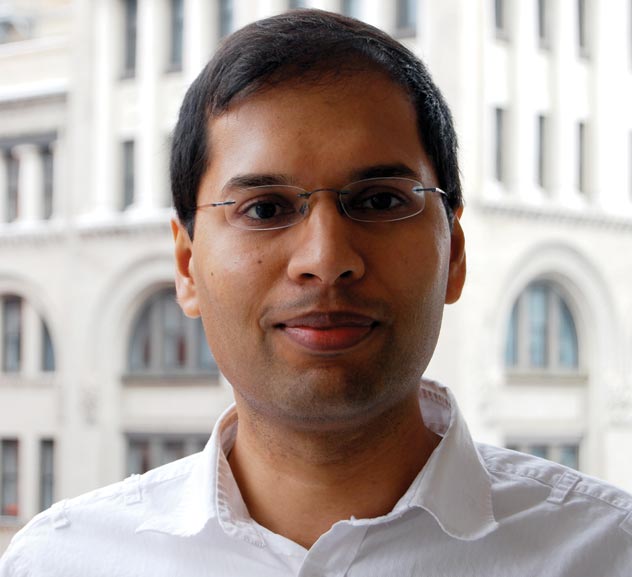 Kolhapur (Maharashtra), Aug 14 (IANS) Mathematics genius Subhas A. Khot who got the Rolf Nevanlinna Prize – the ‘Nobel of Mathematics’ – has an “extraordinary academic talent and remarkable concentration power”, his school teachers recall.

“We are very proud of his achievement which has brought global name and fame to his alma-mater. On his next visit home to Ichalkaranji in December, we have planned a public felicitation for him,” a pleased Gopal G. Kulkarni, principal Venkatraro High School, Ichalkaranji, told IANS.

Khot was a student at the Marathi medium school in the secondary section between 1987-1993 – and was the brightest in all spheres of academics, Kulkarni said, adding that around half a dozen of his erstwhile teachers still teach here.

“He had a special love for maths and science, but was the best in all other subjects. He had extraordinary academic talent and remarkable concentration power. I always knew that he would some day achieve top glory and fame,” Gogate told IANS.

The simple, but bright and helpful boy met all expectations in 2002 when he topped the Kolhapur Division SSC Board exams with a total score of 94.57 percent, and later topped the IIT-JEE in Mumbai and did his MSc in Maths before going to Princeton University for his doctorate.

He bagged the prestigious Nevanlinna Prize for his “prescient definition of the ‘Unique Games’ problem, and leading the effort to understand its complexity and it pivotal role in the study of efficient approximation of optimization problems”.

“He called me up this morning to give the news and I felt very happy that he remembered us in the midst all the international attention he is getting,” Gogate said.

Gogate recalled how Khot would come to his home daily for studies, along with another group of 20-25 students.

“He would come with the textbooks, read the day’s chapters, think, debate and discuss with his classmates, hammer out solutions and answers and go back,” said Gogate, who retired in 1994 from Venkatrao High School.

According to Gogate, Khot never believed in exercising options – like solving any five out of 10 questions in the final exams for 100 marks.

“He would solve all the 10 questions or 200 marks worth, in the same allotted time, and with complete accuracy aided by his excellent handwriting in both Marathi and English,” he said with a smile.

In fact, at Gogate’s suggestion, the young Khot even studied all religious works in Hinduism, Islam, Christianity alongside his regular academics!

Kulkarni added that right from the school days till today, he has not forgotten his teachers or his alma mater.

“On his annual vacations here, he makes it a point to come to the school, interact with all the students, give them academic tips, guide them on how to study or prepare for exams, recount his own preparation methods for various exams he took all his life and even the IMU achievements,” Kulkarni said.

Hailing from a middle-class family, his doctor father Ajit died following a heart attack in 1995. His mother Jaishree is also a doctor in Ichalkaranji, while his younger brother Amol is a doctor practicing in Mumbai.

Not one to forget his roots, Khot keeps in regular touch with his former schoolmates through telephone calls or email and personal meetings during his annual sojourn at Ichalkaranji, and even helps poor students here as per their needs, Gogate said.

A Maharashtrian Jain and pure vegetarian who relishes home-cooked food, Khot used to prepare his meals at home years ago while studying at Princeton University.

“One day, he suddenly called up late night from Princeton University and asked my wife Usha for the recipe of ‘sheera’ – his favourite sweet dish,” Gogate chuckled.

Later, in 2004, he had an arranged marriage with Gayatri, a girl from Nashik who joined him in the US and is presently working with the US Federal Bank. The couple have a three-year old son Neev.