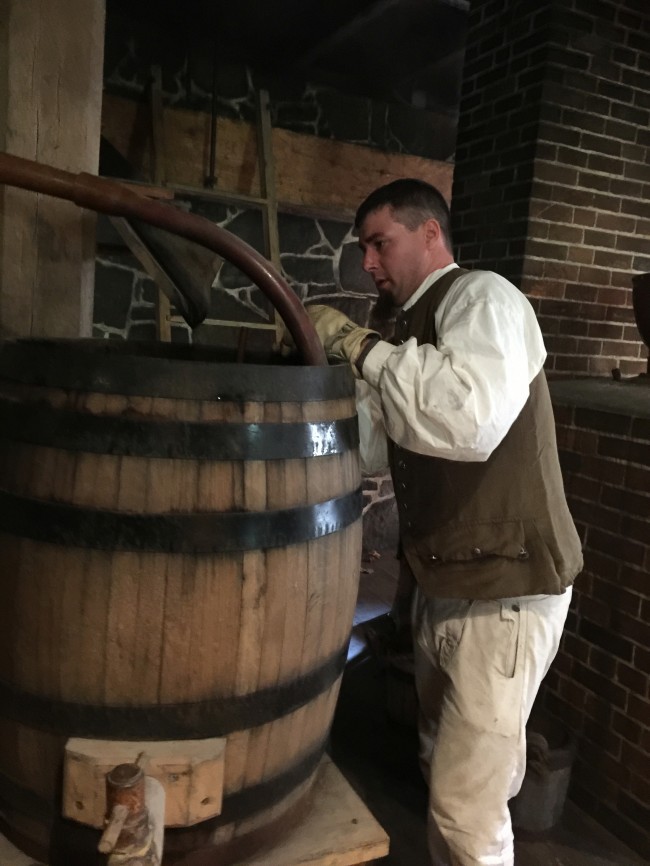 Making whiskey the way Washington did in the 18th century.

Louisville (Kentucky), Dec 2 (IANS) There is a world of difference between what India, the world’s largest whisky drinking nation, cheers with and what connoisseurs call the American ‘whiskey’ spelt with an ‘e’, for starters.

What Indians drink, particularly the cheaper stuff, is largely made from cane sugar, whereas the top selling American brands like Jack Daniel’s and Jim Beam must be produced from grain, one learns on the American whiskey trail.

Master distillers tell the trailers that the five things that make Kentucky Bourbon and Tennessee whiskeys uniquely American products include spring water, grain recipes and distillation process to their maturation in new charred oak barrels that are only used once.

Even Bourbon and Tennessee whiskeys, which together set a new US record in 2013 with exports exceeding $1 billion to both established and emerging markets, are different. And there are many other variations giving each a distinct aroma, color and taste.

One’s ‘spirituous’ journey into the cultural heritage and history of spirits in America, courtesy the US Distilled Spirits Council, begins from the historic Mount Vernon home of the first US president George Washington, just a few miles outside the US capital.

Unlike India’s ‘father of the nation’, Mahatma Gandhi, a retired Washington had no qualms about starting a distillery in 1797 when told by his Scottish farm manager James Anderson that it would make a good business. Dressed in period costumes, Mount Vernon’s new Master Distiller Steven T. Bashore and his team are once again producing whiskey using the 18th century distilling techniques in an authentically rebuilt distillery on the very foundations of the old one.

Restored in 2007 at a cost of $2 million, the distillery has this year produced a limited edition George Washington Peach Brandy Eau de Vie, 800 bottles of which just went on sale at Mount Vernon for $150 each.

Our next stop takes us to scenic Cascade Hollow, not far from Tullahoma, Tennessee, where a Nashville merchant, George A. Dickel, set up a distillery in 1870. Calling his brew as good as the finest scotch, Dickel spelled whisky without an “e.”

To be labelled as Bourbon, a whiskey must contain at least 51 percent corn in its natural grain mix and follow a strict processing regimen.

It’s then aged for at least seven summers in new char-lined wooden barrels in single storey warehouses made out of sheet metal to get a consistent flavour.

The old barrels are sold among others to London-based Diageo, who use it to age their famed Johnnie Walker Scotch whisky in flat Scottish weather, Henley says.

On to Jack Daniel’s in Lynchburg, Tennessee, the oldest registered distillery in the US set up in 1866.

America’s top selling brand Daniel’s mellows its whiskey – with an ‘e’ – by letting it drip through 10 feet of charcoal.

“The real secret to our whiskey is the pure, iron-free cave spring water from the Hollow,” says Chris Fletcher, assistant master distiller, the grandson of the legendary master distiller Frank “Frog” Bobo.

Next afternoon brings us to Jim Beam distillery in Clermont, Kentucky, the maker of the world’s best selling Bourbon.

Beam, the fourth-generation family distiller, renovated and rebuilt his distillery in a mere 120 days at the age of 70 after America ended its experiment with prohibition in 1933 after 13 dry years. “I am mighty glad he did that,” said Noe.

Special bottles made in various shapes and other memorabilia are on display in a room with the floor painted with the names of all the countries Noe’s granduncle T. Jeremiah Beam travelled to. He stopped by India in 1971.

Maker’s Mark in Loretto, Kentucky, on the banks of Hardin’s Creek, the oldest working distillery running on the very site where it was established as a gristmill distillery in 1805, is our next port of call.

Both Jim Beam and Maker’s Mark are now owned by the best-selling Japanese whisky maker Suntory, but their traditions have not changed.

Merger has only made their portfolio much bigger and more international in scope with the addition of Japanese, Scotch, Irish and Canadian whiskies, said Noe.

The Woodford Reserve distillery standing right in the middle of Kentucky’s famous horse country near a beautiful town called Versailles – and pronounced as it’s spelt in the American way – too has been restored to its former 1800 splendour.

The historic distillery still cooks its mash in wooden tanks and distils it in old fashioned copper pot stills under the watchful eye of master distiller Chris Morris.

Up a hill overlooking Kentucky River in Lawrenceburg is Wild Turkey distillery where master distiller Jimmy Russell, who turned 80 this month, has been at it for the last 60 years.

But the grand old man of American whiskey hasn’t made any changes in the way America’s third top selling brand is made since the Italian Campari group purchased it in 2009.

Our final stop is Stitzel-Weller distillery just outside Louisville. Here inspired by his great-great-grandfather Augustus Bulleit, who made his signature high-rye whiskey in the mid-1800s, Tom Bulleit has revived an old family Bourbon recipe.

And with that our odyssey comes to an end, leaving one to echo American author Mark Twain as cited by Morris: “When the end of the world comes, I want to be in Kentucky, because everything there happens 20 years after it happens anywhere else.”

Magical romance of mangoes and the koel song