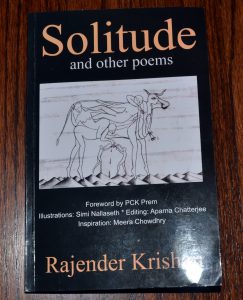 Poet Rajender Krishan’s debut anthology of 60 eclectic, insightful and thought-provoking poems has garnered profuse praise from readers and critics alike. The lyrical poems exhibit a range of genre and a striking breadth of subject matter, composed with rhythmic language and realism. Rajender is a humanist, philosopher, mystic, lover of literature, tradition and religion which is amply reflected in his nuanced poems with nuggets of wisdom. Through his poems, he introspects about life, death, rebirth, creation, preservation and regeneration and also meaning of life. He reflects on the reason for a feeling of emptiness and existential angst experienced by many. He stresses the immense value of silence and solitude which helps in self-discovery’ and in  experiencing a blissful state of mind and  In one of his poems,’ mortification ‘he bemoans the nexus between corporate world, politicians and police which leads to unbridled exploitation of the poor, gender, class and caste divide ,violence and oppression. In his poem ‘Wolves’ he deplores violence against women by cruel and lawless rapists and he follows this poem with another poem about the infamous case of 23 year old Nirbhaya who was brutally beaten,gangraped and murdered in New Delhi on December 16,2012.Rajender concludes his poem’Nirbhaya:The Prologue of Change’ with the stanza,

In the hearts of the youthful

As the prologue of change!

Noted poet, novelist, short story writer and critic P.C.K.Prem in his Foreward  lauds the poet who believes that ‘Life is a great teacher. The joy is in living. Life itself is an expression. It is the only constant that’s forever changing.’

The poet is concerned about air pollution, water pollution, indiscriminate deforestation, shoddy construction and other environmental problems. One of his poems; ’Sandy’s Tandava’delineates the death and destruction in the tri-state caused by hurricane Sandy on October 25, 2012. This was the second-costliest hurricane in the U.S.history.

The poem ‘Migratory Birds’ expresses nostalgia. Unlike the migratory birds the non-resident Indians are not able to relinquish and  return to their homeland. ‘The trauma of leaving the homeland continues to haunt…’the poet observes.

Krishan expresses his concern about America’s out of control Gun Culture with his poem ‘Death in Kindergarten’ ..He recounts the tragic shooting by a gunman of 20 children in Sandy Hook Elementary School, Newtown, Connecticut, on December 14, 2012.

The author has used a few Sanskrit words like prana; Nirvana; Karmic action etc.but given their meanings to help the readers.

Rajender Krishan has a penchant for poetry, photography and the fine arts. After graduating from Delhi University, he migrated to New York in 1989 with his wife Meera Chowdhry and two children. He believes in the freedom of expression and is an admirer of the poet seer Kabir. He loves to share his thoughts with hundreds of writers-poets-journalists, novelists, critics and artists through his website BOLOJI.Com.

All the artwork complementing each and every poem in this book is by Mumbai-based Simi Nallaseth, who has designed, directed and animated for several advertising films, shorts, station ids and music videos.

The book has been edited by poet Aparna Chatterjee who lives in England. She has earned M.A.Psychology from Delhi University, penned over 1,000 poems and edited and published over 12,000 poems.

Solitude and other poems is a poetic celebration of Rejender Krishan’s instinctive love blending his worldly experiences and perceptions that are inspired by the ancient wisdom of Hindu Philosophy.

This book of exquisite new-age poems marks the fresh and original voice of Rajender. This engrossing book of poems is sure to resonate with all poetry-lovers. Readers will find the consciousness-elevating meditative poems enriching  and fulfilling. A ‘Must read’ book!