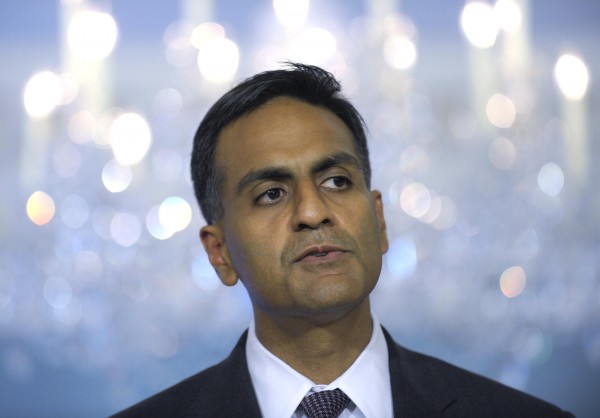 Washington, Dec 3 (IANS) Richard Rahul Verma, the first Indian-American to be nominated as the US Ambassador to India, believes there is renewed enthusiasm on both sides to take a reenergized India-US partnership to the next level.

“There is no question that this is a defining and exciting time in the US-India relationship,” he told the Senate Foreign Relations committee Tuesday at his confirmation hearing.

Verma, 45, a former key aide to then secretary of state Hillary Clinton, noted that President Barack Obama “will make a historic visit to India in January, becoming the first US head of state to attend India’s Republic Day and the only sitting US president to visit India twice.”

“His trip will build on Prime Minister Modi’s highly successful visit to the United States this past September,” he said.

“There’s little doubt the relationship has been reenergized, with renewed enthusiasm to take our partnership to the next level,” said Verma , who was named as the US envoy to India just ahead of Modi’s visit.

Recalling his past association with the panel, Verma said “If confirmed, I am committed to partnering with you again in shaping our relationship to India – a country so important that President Obama called it the defining relationship for the United States in the 21st Century.”

“The US and India share a wide-range of critical national interests,” he said. “Our partnership is deep, it touches nearly every endeavor of human pursuit, and it has produced important gains for each of our countries.”

“Across Asia, US and Indian interests are converging. India has been called the lynchpin of our Asia rebalance,” Verma said.

“With India’s Look East, and now Act East policies, our two countries can play a critically important role together in bolstering peace and security and promoting a rules-based, liberal, democratic order in the

“The ripple effects of our partnership need not be limited to Asia,” Verma said.

He cited Modi as noting, “the true power and potential in this relationship is that when the oldest and largest democracies come together, the world will benefit.”

Verma acknowledged that India and US “will have our differences from time to time – close friends often do – but when we do have differences, it is imperative that we maintain a healthy dialogue.”

Expressing deep appreciation of all those who have worked so hard on cultivating this relationship over many decades,” he also acknowledged the contribution of immigrants from the Indian subcontinent.

They “took a chance like my parents, who worked hard, who continue to pursue their dreams, and along the way have helped ensure India and the United States become the closest of friends and partners,” Verma said vowing to “strive to live up to the high standards they have set.”

The New Delhi post has been vacant since the previous ambassador Nancy Powell quit in May after India-US ties hit a low after a major diplomatic spat over the December arrest and strip search of Indian diplomat Devyani Khobragade in New York.