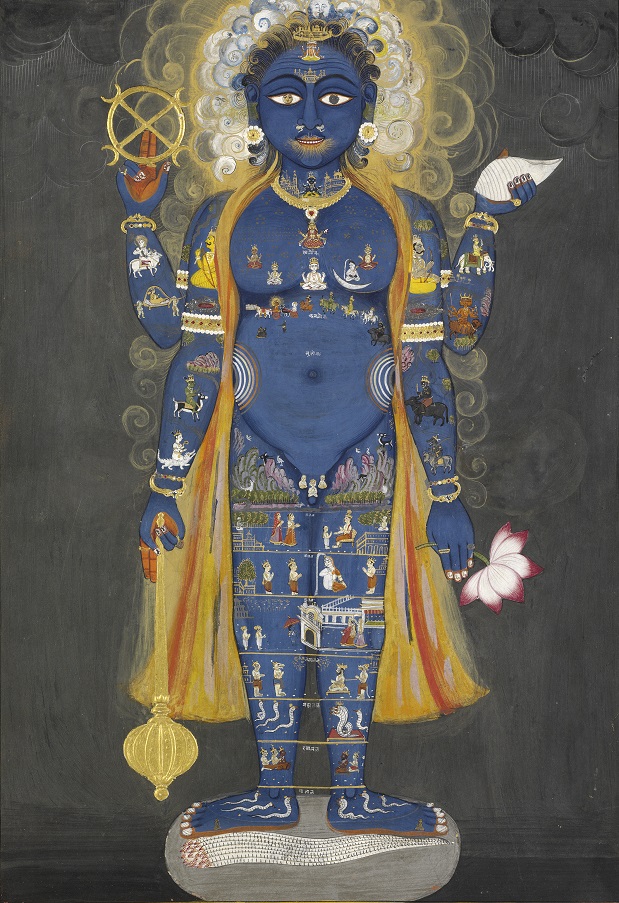 A painting on display at “Yoga: The Art of Transformation” exhibition in Washington: Vishnu Vishvarupa. India, Rajasthan, Jaipur, ca. 1800-20; Opaque watercolour and gold on paper.

Washington, Nov 10 (IANS) The mysteries of the ancient Indian practice of yoga and its profound meanings are explored in what is described as the world’s first exhibition of yogic art at Washington’s Smithsonian’s Arthur M. Sackler Gallery.

Through masterpieces of Indian sculpture and painting, Yoga: The Art of Transformation explores yoga’s rich diversity and historical ransformations, including its philosophies, transformational goals, and importance within multiple religions.

On view through Jan 26, 2014, the exhibition with more than 130 objects borrowed from 25 museums and private collections in India, Europe, and the United States, also examines the varied roles that yogis and yoginis played in society, from sages to spies.

Highlights include an installation that reunites for the first time three monumental stone yogini goddesses from a tenth-century Chola temple; ten folios from the first illustrated compilation of asanas (yogic postures), made for a Mughal emperor in 1602; and Thomas Edison’s Hindoo Fakir (1906), the first movie ever produced about India.

“This exhibition looks at yoga’s ancient roots, and how people have been trying to master body and spirit for millennia,” said Julian Raby, The Dame Jillian Sackler Director of the Arthur M. Sackler Gallery and Freer Gallery of Art.

“By applying new scholarship to both rarely seen artworks and recognized masterpieces, we’re able to shed light on practices that evolved over time-from yoga’s ancient origins to its more modern emergence in India, which set the stage for today’s global phenomenon.”

A free public festival, “Diwali and the Art of Yoga,” marked the Oct 26 opening of the exhibition and Diwali, the Indian festival of lights with spotlight tours, rangoli (rice powder) drawings and yoga-inspired art in hands-on workshops.

In conjunction with “The Art of Transformation,” the Freer and Sackler galleries will also host “Yoga and Visual Culture,” a free interdisciplinary symposium for scholars and yoga enthusiasts Nov 21-23.

Seventeen scholars from a range of disciplines will present cutting-edge research on diverse aspects of yoga’s visual culture, organized around such topics as “Yoga and Place” and “Yoga and Print Culture.”

Many Indian-Americans score victories in states