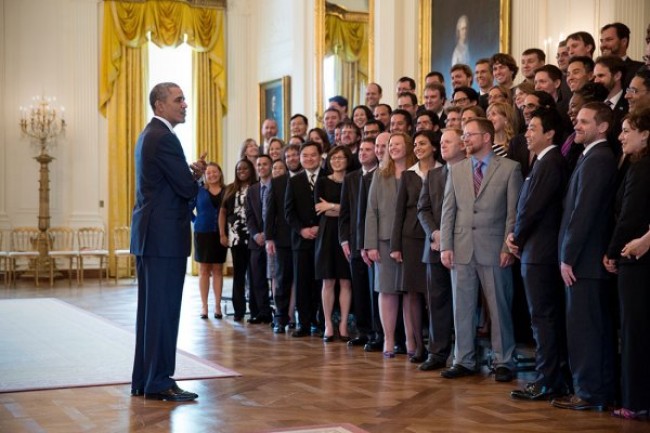 Washington, Jan 10 (IANS) Four Indian-American scientists have been chosen among 102 researchers who will receive the Presidential Early Career Awards for Scientists and Engineers (PECASE) — the highest honour given by the US government to science and engineering professionals.

“I congratulate these outstanding scientists and engineers on their impactful work. These innovators are working to help keep the United States on the cutting edge, showing that Federal investments in science lead to advancements that expand our knowledge of the world around us and contribute to our economy,” Obama said in a statement on Tuesday.

Lal, who earned his Master’s from Delhi School of Economics, is an associate professor in the department of earth and environmental studies at Montclair.

Undertaking interdisciplinary research that explores interconnections among society and the environment, he has been working on environmental economics and economic geography, human dimensions of ecosystem management, natural resource conservation and policy and climate change.

Chowdhury, who received his PhD from the Georgia Institute of Technology, directs the Next Generation Networks and Systems (GENESYS) Lab. He is the winner of the “NSF CAREER” award in 2015 and the Office of Naval Research Director of Research Early Career Award in 2016.

He is known for his work on biomarkers that utilise human deciduous and permanent teeth to reconstruct the timing of exposure to various harmful chemicals and essential nutrients.

At UCLA, Tripati’s lab uses the chemistry of natural compounds as well as models as tools to understand how the Earth works to understand climate change, the oceans, and the transfer of carbon between the biosphere, atmosphere and oceans.

The awards, established by President Bill Clinton in 1996, are coordinated by the Office of Science and Technology Policy within the Executive Office of the US president.

Awardees are selected for their pursuit of innovative research at the frontiers of science and technology and their commitment to community service as demonstrated through scientific leadership, public education or community outreach.

‘Age of expansionism over’: Modi’s message to China from Ladakh