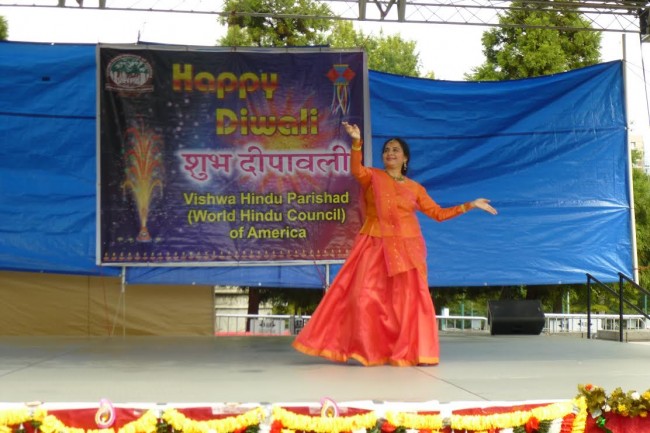 Atlanta, GA: The fall season is synonymous with a lot of colors but here inAtlanta, however, it is not just the trees that are showing off their beautiful hues of red, yellow, orange and purple. The Hindu festival season being in full swing, the community can be seen dressed in their colorful traditional best, celebrating Navaratri, Golu, Durga Pooja and Dussera, and preparing for Diwali-the grand finale!! And it is thus, every year that the beautiful Centennial Olympic Park, on a crisp autumn Sunday gets transformed into a pretty kaleidoscope of colors, with the Indian community gathered together to celebrate “Diwali-Festival of Lights,” an event organized by World Hindu Council of America (VHPA), Atlanta Chapter. 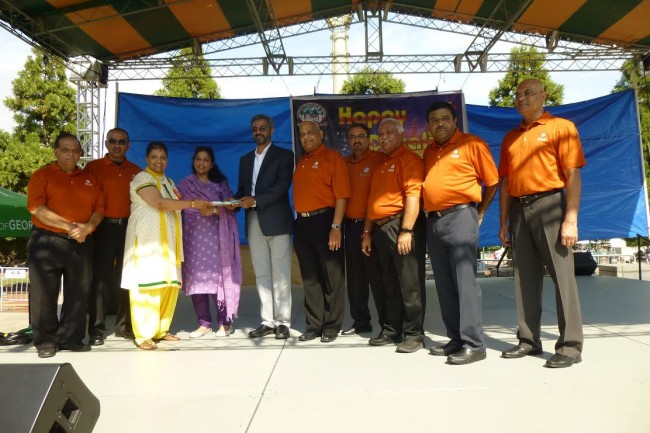 This year, though, the program took off with a rather shaky and wet start, the morning of Oct.12th bore witness to an unusually brisk rain. Miraculously, by 11 am the clouds gave way to a bright sunny sky and the event proceeded without any major hiccups. This was the 9th annual celebration and, like every year, it presented the music and dances ofIndiaperformed by the talented artists from the Atlanta Indian community. The event was free and open to public, with free snacks, tea and lunch for the entire crowd. The attendance this year was about a thousand people, much less compared to the past, in part due to the inclement weather in and aroundAtlanta, not to mention the traffic and parking challenges posed by the Falcons game in downtown.  The performing artists- about 20 different groups/individuals- braved all these challenges, made it to the venue and gave an outstanding performance. They were greatly appreciated by the audience, who cheered, clapped and at times broke into impromptu dances on the green lawns of the amphitheater. 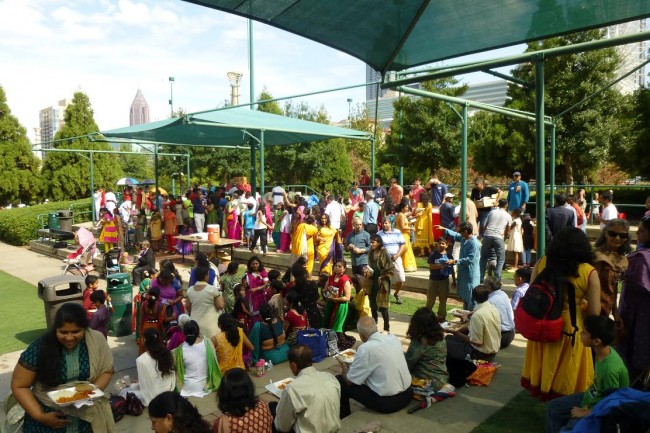 The program was opened with the traditional Ganesh and Saraswati Vandana by the students of Balvihar and all the kids present in the audience. Kusum Khuranaji, President of VHPA,Atlantachapter gave the welcome address.  The traditional lamp was lit by the chief guest for the occasion, Deputy Consul in the Consulate of India,Atlanta, Hon’ble R.Srinivasji and his wife Anaghaji. After a brief address by Srinivasji, the cultural program commenced with a pure classical Kathak dance by Leera Rawal, a disciple of Birju Maharaj and Smt. Kumudiniben Lakhia, followed by variety of classical, fusion, folk and Hindi Film dances, along with melodious old and new Hindi songs. The 5-7 year old students of Sreedevi Dadithota of theNatyaabhinayaDanceSchoolpresented a beautiful invocatory dance, in the Kuchipudi dance form.  The performance was especially impressive, because of the young age of the dancers! Cobb Balvihar students team coordinated by Neetu Sharma put forth a dance medley, choreographed by Nikki Bagadi set to popular Hindi Film songs. Cobb Balvihar teachers and volunteers, Neetu, Varsha Gupta, Seema Laddha, Ritu Sehgal and Nicky Bagadi presented another fast paced medley and got the crowd dancing along with them. Balgokulam students group, coordinated by Arti Sarda, performed a traditional Garba. Another group of talented kids under the tutelage of Sweta Khatri, danced on a sweet medley starting with the name of Lord Ganesha followed by Punjabi Bhangra, Hindi film and Rajasthani dance forms. An artist deserving special mention, Komal Bhullar, a self taught 10 year old, danced to a lively combination of authentic Punjabi songs, complete with props and traditional Bhangra. Mrunal Saggere from Maharashtra Mandal of Atlanta, coordinated and choreographed a kids group dance, set to “Deva Shri Ganesha”. The group, too large to be accommodated on the stage, danced on the green lawns, with an adorable Bal-Ganesh amidst them. The talented young ladies from the Kalaivani Dance andMusicAcademyperformed a Bharatnatyam Fusion dance. Sure to make Guru Padmaja Kelam proud, their skilled moves and great coordination drew a large round of applause.  While the kids presented a beautiful array of dance forms, the adults were not to be left behind, with their energetic and quality dance performances. Aadithya Prem, a long time favorite with the audience and organizers alike, and Mahek Patel, an accomplished dancer fromMahekDanceAcademyperformed a fusion dance, with beautifully choreographed moves and striking dance costumes. Also showcased were the beautiful folk dances ofIndia: the Gopika-Kolatam, choreographed by Swetha Pakala, was performed by “Natya Mayuri”. The participants were Swetha, Vidya Ktragadda, Anu Khandavalli and Neelima Sunder Sen, a group of talented ladies with a passion for dance. The Koli or Fisherman Dance fromMaharashtrawas performed by three enthusiastic couples Mrunal/Sanjay Saggere, Radhika/Sandesh Shinde and Dipti/Sunil Kulkarni, dressed in the unique Koli costumes. The most popular, fast paced “Lavani”, performed by Neha Worlikar Patil and Ruchi Dave Iyengar, was a huge success. Both the Lavani and Koli dances were choreographed by Neha who has been training a lot of groups for Maharashtra Mandal. The “Jogwa” a prayer dance paying homage to Goddess Durga was performed with flourish by Pratima & Jaywant Dhumal, Vandana & Shailesh Pawar, Neeta Sorte, Manjula Kirangi, Rekha Yadav & Sushil Varma. The dance, choreographed by Pratima, ended with the formation of the Raudra Roop of Goddess Durga, making for a really good photo-op. Adding a completely different flavor to the show, was the high energy performance of Zumba, a popular dance cum exercise routine, led by Shiela Devlia of the “Z Fitness With Shiela” accompanied by Hema Vishwanathan and Prina Patel.

The cultural program at the VHPA Festival of Lights has always showcased some of the best talents fromAtlantaand this year, it was a great pleasure to listen to Amol Khanapurkar, a singer par excellence who enthralled the crowd with two Hindi film songs. Shyam Gupta, a well known vocalist who really does not need an introduction, gave an excellent impromptu performance. Jiten Singh sang an old favorite “Mere Desh ki Dharti” and Shyam Tiwari soulfully did justice to “Tumko Dekha to yeh Khayal ayaa…”. Another gazal “hum to hain pardes mein, des mein nikla hoga chand, sung by the under-signed, Smita, reminisced about the faraway homeland ofIndia. The organizers, mindful of the love of dance of the Indian Community at large, from time to time, invited the audience to an open dance session on the lawns, playing popular songs from Tamil, Gujrathi, Marathi, Bengali and Punjabi. The audience gladly took the center stage for a rocking good time! Sabitha Venugopal kept the audience engaged and informed with her efficient emceeing, making sure they knew about the food, mehandi, face painting and the raffle drawing. Among the raffle prizes were gift certificates from Madras Chettinad, Boba Moca and Venky’s India Bhavan. There was a Nexus 7 table from an anonymous donor to be only left behind by the grand prize Kindle Fire HD sponsored by Expedite Technology Solutions

The major sponsors for the VHPA “Festival of Lights” were Ambaji Shakti Mandir, Global Mall, House of Spices, Pratap Singh Chauhan, Chandra Tiwari, Neera Bahl and Drs. Swati and Abhishek Gaur. Ajay Houde from HSS and Milind Bavadekar from Maharashtra Mandal of Atlanta, along with their team of volunteers provided valuable support in the planning and execution of the event. The Mehandi and face painting booths were run by our talented adult volunteers Indu Goel and Chandra Chandora, and not to be left behind by energetic youngsters Shreya Dube, Anushka Shivram, Yasmen Khoramabadi and Shreya Mishra. A group of GaTech student volunteers from Sigma Phi Epsilon helped throughout the day, from set-up to clean-up. The DJ for the event was Bally from DJ Bally International. The youngest volunteers were the students of Balvihar who sold the raffle tickets all day long. Last, but not the least, the artists who performed at the event was the largest group of volunteers – students, working professionals, moms & dads – who took time from their busy schedules to make this event a great success. The volunteers from VHPA, Atlanta Chapter could not have pulled off a challenge like this without the active support of the Indian community, especially since it is resolved to keep the event free and open to public. With the growing success of this event, with each passing year, the team at VHPA, Atlanta Chapter is committed to present outstanding programs in future and continue its efforts to bring the community together.